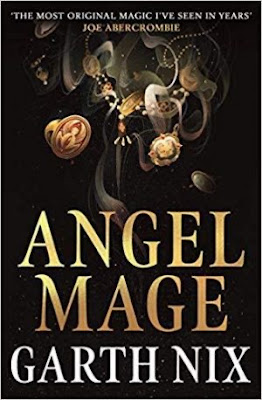 Blurb From Goodreads:
More than a century has passed since Liliath crept into the empty sarcophagus of Saint Marguerite, fleeing the Fall of Ystara. But she emerges from her magical sleep still beautiful, looking no more than nineteen, and once again renews her single-minded quest to be united with her lover, Palleniel, the archangel of Ystara.
A seemingly impossible quest, but Liliath is one of the greatest practitioners of angelic magic to have ever lived, summoning angels and forcing them to do her bidding.
Liliath knew that most of the inhabitants of Ystara died from the Ash Blood plague or were transformed into beastlings, and she herself led the survivors who fled into neighboring Sarance. Now she learns that angels shun the Ystaran’s descendants. If they are touched by angelic magic, their blood will turn to ash. They are known as Refusers, and can only live the most lowly lives.
But Liliath cares nothing for the descendants of her people, save how they can serve her. It is four young Sarancians who hold her interest: Simeon, a studious doctor-in-training; Henri, a dedicated fortune hunter; Agnez, an adventurous musketeer cadet; and Dorotea, an icon-maker and scholar of angelic magic. They are the key to her quest.
The four feel a strange kinship from the moment they meet, but do not know why, or suspect their importance. All become pawns in Liliath’s grand scheme to fulfill her destiny and be united with the love of her life. No matter the cost to everyone else. . .

Review:
136 years ago, all of Ystra was infected with the Ash Blood plague.  Most died, their very blood turning to ash within their veins.
The ones who survived became beastlings – monsters.
The survivors still carry the curse within their blood.  If anyone calls upon angelic magic in their presence, the curse is activated and they either die an ash-y death or turn into mindless beastlings.
Now Liliath, a powerful angel mage with the ability to bend even archangels to her will, is back from her death-like state and has only one goal: to find the four she has been waiting for.  Four people who, upon meeting, feel as if they’ve known one another their whole lives.
Four people who are linked in ways they cannot begin to understand.
Four people who will be used as pawns for Liliath to accomplish her goal...
I’ve been a Garth Nix fan for years now.  I still remember borrowing the Abhorsen series from the library and falling instantly in love with his writing, his world building.  He always manages to find a totally unique way of spinning magic in his novels, and Angel Mage was no exception.  Because holy fuck, the idea of angelic magic was so freaking cool.  This whole world was honestly so brilliantly constructed and I’m absolutely heartbroken this book is a standalone!  I’m praying that Nix will do a spin off because I’m really just not done with this world - there’s so much more he can do and I need to see what happens next for everything that’s left unresolved. 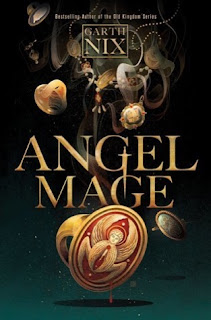 I won’t lie - it took me a little while to get into this book, possibly because I was drowning under uni work and reading when I started it.  But once we were introduced to our band of misfits, I just fell in love.  The magic in this book is just so cool - and I love that while there was insta-bond, there was no insta-love.  Insta-love is one of my biggest pet peeves and I bow down to Nix for skating around the trope while avoiding it completely.
The Fab Four - my three musketeers (plus one) were amazing.  They were all so diverse and different, but they worked together so well.  I think my favourite had to be Dortea, the wacky scholar who I just fell instantly in love with.  She’s so unlike anyone else I’ve read about - having that scholarly sort of ‘not quite there because I’m too focused on my work’ vibe that I just adored.  Plus lesbian queen.  Say no more.  Agnez was probably my second favourite - and the most badass girl.  A Musketeer cadet, she was wicked with a sword and her words and I love that girl.  Simeon, the giant but gentle doctor who really didn’t want to get caught up in all of this - he had people to save!  And Henri, who just really, really wanted to make some money out of this insanity – I loved him, especially his instant big brother vibes towards Agnez.
Liliath... I don't want to say too much about her.  Only that she's awesome?  Like, yes, she's basically the villain... but she's also really cool.  And honestly one of the most compelling characters in the book.  A sequel focusing on her... would be awesome... just saying...
I also loved that this book was not lacking at all when it came to strong as hell women.  Most of the people in power?  Women.  Even if you didn’t necessarily like them, they were all women with a hell of a lot of power and not many fantasy books put the power in women’s hands.  So that was ridiculously cool to read about.
As I’ve mentioned, it does take a while for the plot to really get going – there is a lot of world building being done in this book, which is just another reason I never suspected it would be a standalone when I started it.  It reads so much like the start of some epic series and I honestly need the epic sequels!  So much of the true action happens right towards the end of the book and I’m still absolutely heartbroken that this is an only book!  Because so much time and detail went into this world.  This world which is sort of like middle ages Europe – or whenever the Three Musketeers is set – but with angel mages who can use icons to call upon the angels to do their bidding.  Please, tell me you wouldn’t wanna read more than just one book about that?!  I sure as hell want to!  I’m honestly just desperate for a book two, guys.  I still have questions about this world – I still have too many attachments both to my Fab Four and to the concept of angel magic.  Can you tell I’m a little bit too obsessed with the angel magic?
The writing was wonderful – though at times I felt all the different POVs was a little jarring.  I did forget who everyone was to begin with, but I have a bad habit of doing that with even real people.  I probably should work on that…  But yes, as expected of Nix – the writing was brilliant and he painted this world like Dortea paints her icons of the angels: with flair, talent and a dash of magic!
Honestly, I could keep going but I really don’t want to ruin anything about this book.  Just remember: angel magic, unlikely friends, a generations-old mystery illness, lesbian queen artist-student type.  Now go, buy this book, read and join me in my desperation for more angel magic!

Read this book if you liked:
The Old Kingdom/Abhorsen by Garth Nix
Mistborn by Brandon Sanderson
Six of Crows by Leigh Bardugo

Happy Reading
Megan
*This book was received from Gollancz in exchange for an honest review
Posted by TheBookAddictedGirl at 08:00

According to Stanford Medical, It is really the SINGLE reason women in this country live 10 years more and weigh on average 19 KG lighter than us.

(And by the way, it has absoloutely NOTHING to do with genetics or some hard exercise and really, EVERYTHING to "how" they are eating.)