The Scandalous Sisterhood of Prickwillow Place by Julie Berry 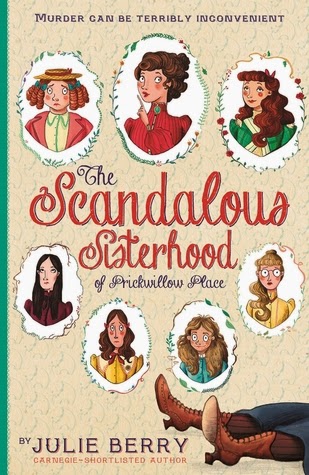 At Prickwillow Place, Disgraceful Mary Jane, Smooth Kitty and their fellow students are keeping a deadly secret.
When the headmistress of Saint Etheldreda’s School for Young Ladies drops dead at Sunday dinner, her seven pupils agree on a clever scheme: to bury their teacher in the vegetable garden, dress up Stout Alice to pose in her place, and educate themselves.
This is tricky enough in a small Victorian community, but when the girls deduce that their teacher was poisoned – it was the veal! – they realise there is also a murderer on the prowl…

Review:
"Killed?" she squeaked.  "Did you say killed?"
"Killed," Dour Elinor said.  "Murdered."  She savoured the R's in her pronunciation: murrrrderrrred.
"Oh.  Oh my…" 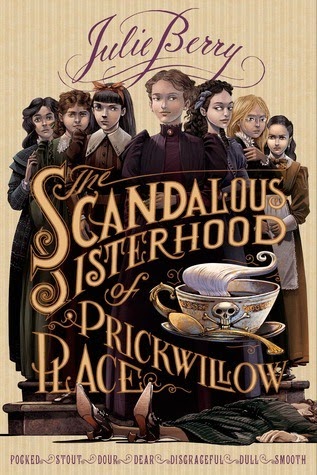 The seven girls of Saint Etheldreda's School for Young Ladies have been sent to the school for various reasons, mainly for the strict traditional teachings of its headmistress Mrs Plackett.  Who mysteriously dropped dead, along with her brother, at Sunday dinner.  Poisoned, the girls deduce, by the veal.
Faced with the possibility of getting sent home to their families, and away from the sisterhood the seven have formed, Smooth Kitty declares that there's a way they can stay at Saint Etheldreda's: if they pretend that their headmistress is still alive, bury the bodies in the garden and dress Stout Alice up as Mrs Plackett.  All the while, of course, teaching their own lessons and trying to find out who murdered their headmistress.
There's a murder loose in their village and the seven will need to keep their wits about them to catch the killer before they strike again!
The Scandalous Sisterhood had a tough act to follow when I picked it up: I recently read Murder Most Unladylike, which I loved to pieces.  And so, despite the amazing things I've heard about The Scandalous Sisterhood, I was worried for it.  But as soon as I opened the book, saw the portraits of the seven and began reading, I realised I'd been worrying in vain: The Scandalous Sisterhood is brilliant!  I adore the Victorian era and loved the quirkiness and mischeviousness of the seven girls – and the fun, interesting plotline too!
None of the girls were stereotypical of the Victorian era – or any era, really.  Since there were seven main characters, it was only natural to prefer some and to find the others a bit flat, but I must say that I liked all of the girls.  I found keeping track of them easy, thanks a lot to the cute, beautiful illustrations of the girls at the beginning and the little characters' relations summaries.  I found this just too cute and very helpful!
I think my favourite character was probably Pocked Louise: she was very clever, determined and rather unique for the era as she was a girl obsessed with science.  The strangest character was the odd and spookily funny Dour Elinor: her obsession with death was disturbing, but the character's little one-liners were very amusing!  Smooth Kitty and Disgraceful Mary Jane were, I think, the two ring-leaders of the sisterhood.  Kitty was clever and funny, if a little bold at time.  And Mary Jane was scandalous and hilarious – even if a little painful!  Stout Alice was brilliant – poor thing, though, dressing up like a dead old woman!  She was funny and clever though.  And I loved Dear Roberta and Dull Martha: bless them, they were so sweet! Whilst all of the characters were pre-or-early-ish-teens, a fair few felt older than they would feel these days.  After all, girls were expected to grow up fast in the Victorian era!  I think some people might get put off by the fact that there's an adjective in front of each of the girls' names, but I thought it was cute and funny – it also helped in the beginning to keep track of the girls' personalities!
Berry's writing was absolutely perfect for the time period – and utterly addictive!  It was a little confusing, admittedly, because the perspective switched between the girls quite a bit, but it was exciting and hooking nonetheless.  It was also witty, funny, suspenseful and at times painful – those girls really got themselves into some dreadful scrapes!  Which was so funny!
I love a good murder mystery, as I may have mentioned once or twice in previous reviews, and I'm generally pretty good at solving the murder.  Call it too much CSI or psychicness (the answer is obviously psychicness – is that even a word, though?), but I'm not half bad at finding killers.  And yet, for most of The Scandalous Sisterhood, I was just completely in the dark.  I saw a few things coming a mile off, but the killer... I did not suspect that one!  I loved all the twists – the plot turned out to be way more complex than one would originally think and it was awesome!  Oh, and I liked the romance-aspects of the book: it was really subtle and used brilliantly to move the plot along.
The Scandalous Sisterhood was a brilliant book and such great fun!  I read it in one sitting and was left desperate for more scandalous adventures!  I loved the ending, how everything finished perfectly, but that it also left lots of scope for more adventures for our sisterhood of seven!  I really hope there's another book!

Happy Reading
Megan
* This book was received from Picadilly Press in exchange for an honest review
Posted by TheBookAddictedGirl at 11:29