The Special Ones by Em Bailey 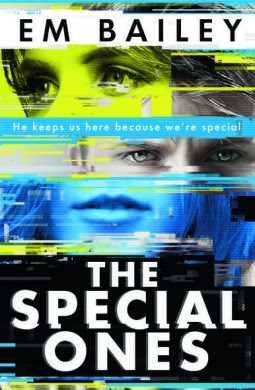 
Esther is one of the four Special Ones, chosen to live under his protection in a remote farmhouse.  They are not allowed to leave, and they must always be ready to broadcast their lives to eager followers on the outside.
But on renewal day when he decides that a new Esther, Harry, Lucille or Felicity must take their place, the old ones disappear – forever.  The new ones don’t always want to come, but soon they... realise.  Until one day Esther has a realisation of her own, and it changes everything.
A heart-racing thriller set in a cult.

Review:
I received The Special Ones on a normal Wednesday morning.  I'd been planning on spending the day making my shoes for YALC.  Instead I opened up a parcel, saw these two books by Em Bailey and decided to see what The Special Ones was about.  By lunch, I was already over 100 pages in and I just did not want to stop.  Ever.  I was utterly hooked – this book is amazing in a horrible, creepy-as-hell way!  I simply couldn't put it down, was just sucked into this terrifying world, into the life of 'Esther' as she played the role of her life...  It was just...  I'm struggling to find the words! 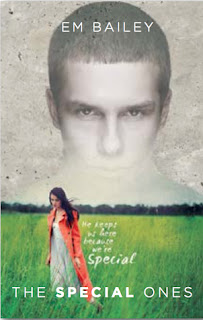 You see, Esther is one of a group of people called the Special Ones.  One of four enlightened, immortal people chosen by him and living to inspire their followers, who watch them as they live their perfect lives, as he watches over them.
The rules are numerous and Esther always follows hers.  She remains in the farm house, she cooks and cleans, she remains calm and dignified and she never touches the others – that simply isn't allowed.  Because he watches at all times, watches for mistakes.  The moment they make one, they're gone, never to be seen again – until they 'return' in a new body, unwilling and angry until they just... give in.
Harry, Esther, Lucille and Felicity live in his world, play their roles, play for their lives.  They live in fear of him and yet they're told he protects them...
God, I just loved how Em Bailey wrote everything in this book!  How she wrote that slow-burning beginning, Esther's fear and strength and guilt, the terrifying indications of his presence though we didn't see him – not yet...  It was just... wow.  Atmospheric, suspenseful, terrifying, creepy as goddamn anything!  I really don't want to give too much away, but the way we saw that brainwashing... utterly and completely scary as hell.  It was all just so so clever and in such an effortless way – it flowed and it grabbed and it sucked you in.  And then, half way through, bam!  Action hit off and the terror just grew even stronger. 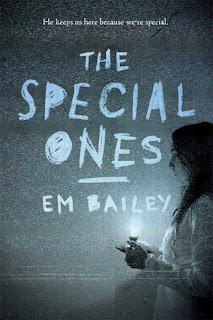 Up until then, we'd been in Esther's mind – and she was such a brilliantly complex, fascinating character.  And then, suddenly, we were in his head.  And that was... scary as frack.  His mind... God it was so terrifying!  I do wish there was a little more warning or explanation – one minute I was listening to Esther, the next I was watching her through his eyes and it just was like a huge jolt of surprise – which actually might have made the fear I felt reading his chapters even stronger.  Because he was... terrifying.  And the more I read about him, twisted as it was, I kind of understood a little more about why he made them live like that – the sick workings of a psychopath who wanted people to suffer like him, who wanted to be important, who wanted to belong...  Who found people as alone and vulnerable as could be and stole their lives from them, made them become people from a hundred years ago, with some words in a book being their only guidance, fear being their motivator...  It was scary, how horribly real he felt.
I also really liked Felicity – she was sweet and innocent and joyful amongst all the horrors of the farm, a burst of sunshine.  Harry was calm and reassuring – the relationship between him and Esther was utterly unique, unlike anything I'd ever read in YA before, and was totally perfect for the story.
I've never read anything about a cult before, although I know there are a fair few out there in the YA market right now.  I've studied them in sociology and watched them on crime shows, but reading about a forced cult member's life was so much more hard hitting.  The way he was totally separate too was different, and although we got to look into his head, we never really knew why.  I have theories, but some concrete evidence would've been nice – was he just a psychopath?  Did he have some kind of mental health disorder, like schizophrenia?  The questions are endless and many are left open, and yet I rather liked the ending anyway.  It... it fit.  The finale felt a little rushed, perhaps, but maybe that was just because I was reading as fast as Dr Reid at the time (not really; I'm not that good – and bonus points to anyone who gets that reference).
The Special Ones was unique and brilliant and horrible and creepy and so goddamn addictive it's untrue.  I dare anyone to read it and not finish it in a day or two.  I found myself reading well into the wee hours to finish – and then regretting that choice instantly when I found I couldn't go to sleep and was jumping at every little noise.  Never will I read another Em Bailey book in the dark – although I will be reading Shift soon.  Just... after I've calmed down from The Special Ones.  My heart is still pounding ad my head is still reeling and oh my God. If you haven't read it just go and read it right now!  It is just... mind-blowing and breath-taking and goosebumps-raising.  It is a phenomenal book that has left me shocked and scared and amazed because it felt so damn real.  I just... I have no other words.  Just read it and read it now.
And when the sun is shining.  Because it's Thursday and I only slept last night after I'd finished the book and watched Friends for an hour.
I regret nothing.  The Special Ones was worth every bit of sleeplessness.  Every single (yawn) bit.

Read this book if you liked:
The Bunker Diaries by Kevin Brooks
The Leaving by Tara Altebrando
Seed by Lisa Heathfield
13 Minutes by Sarah Pinsborough

Happy Reading
Megan
* This book was received from Egmont in exchange for an honest review
Posted by TheBookAddictedGirl at 13:16

Email ThisBlogThis!Share to TwitterShare to FacebookShare to Pinterest
Labels: 13+, 4½ Stars, Contemporary, Em Bailey, For Review, Mystery, Psychological Suspense, The Special Ones, Thriller-Suspense, YA

OH! This post just reminded me that I have a copy of this book. And that I'd still like to read it. I'm glad you enjoyed it so much. Thanks for the reminder :)

This had me hooked from page 1 - chilling, atmospheric, - lots to talk about with this one.