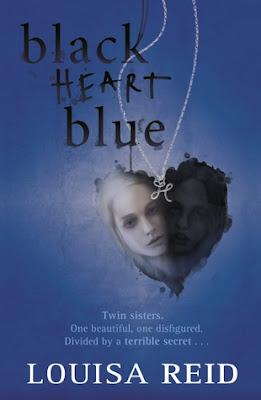 Hephzibah
You have no idea what it’s like having a freak for a sister.

The Father
When he was busy with his bottle we were usually safe.  Usually.

Hephzibah and Rebecca are twins.
On beautiful, on disfigured.
Trapped with their loveless parents, they dream of a normal life.  But when one twin tragically dies the other must find a way to escape.  Because if she doesn’t she’ll end up like her sister… 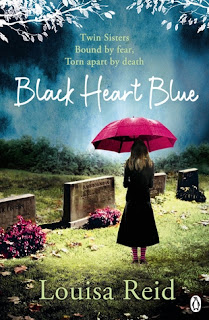 Review:
The day after reading this, I went to the cinema.  I was going to see a great film, one I really loved.  But I kept thinking about Black Heart Blue.  I could not get it out of my head.  That was a few weeks ago now.  And it's still just as much in my head now as it was the second is finished it.  That there is the sign of an amazing book…
Hephzibah and Rebecca are twins.
Hephzi is bold, beautiful and confident.
Rebecca is quiet, always living in her sister's shadow.
Now Hephzi is gone and Rebecca is all alone, alone with the lies and the secrets and abuse.
Rebecca has to escape her dreadful and prison-like home - before she shares her sister's fate...
I'm sure you all know by now that I love contemps.  I knew this would be a very powerful read…  What I wasn’t expecting was the pain I felt, the lump that was constantly in my throat, the tears in my eyes.  This was a seriously dark book but somehow it was also so full of hope.  Nonetheless, I felt my heart break a million times as I felt completely in love with both twins and hated The Parents with everything I had.  This was not a light read.  It will mess with your emotions, your head, your heart, it will grip you from the very first page and never let you go.  And even once you’ve finished and started a new book; it won’t leave your head or heart.
And yes.  It is seriously that absolutely, breaktakingly good.
The characters just stole the show for me.  They were all so amazingly real.  Brave, vibrant Hephzi, who was so alive and desperate for freedom, but needed her sister more than anything.  Rebecca was broken inside and also the strongest person ever.  As I heard her history, it just broke my heart: she was so sweet and pure and strong and I loved her so, so much.  The bond between the two of them was amazing too: so real, they trusted the other with their life and this bond stretched beyond the grave.  And while it had characters I loved so, so much, it also had some I hated equally.  Namely The Father: I could have physically murdered him, even though he’s fictional.  And the Mother was almost as bad.  Their family was suffocating and full of terror, fear, pain and endless violence.  It made my skin crawl – and made me love Reb and Hephzi even more.
Some of the supporting characters were amazing too – Danny in particular, and his wonderful family.  They reminded me that not everyone are atrocious people like The Father, that there are truly good people too.
The writing was incredible: it was split between Hephzi and Rebecca, switching between them, and they both sounded so different.  The writing was haunting, beautiful, suspenseful and just amazing.  Which brings us to the incredible and horrible plot.  One twin told us about “Before” and the other about “After”.  Having the look at "After" made me desperate to find out what happened.  I couldn't put Black Heart Blue down; I was so wrapped up in the story.  I knew much of what happened would be bad, but I never saw any of it coming.  Amazing…
The themes in this were really, really dark.  Reid tackled some seriously tricky issues with grace, really getting into my head and making me think, but without making me want to stop reading.  This book just really got inside me head and heart.  Just like Rebecca, this is “a story inscribed hard on my heart”.
And the emotions were even stronger: nonstop and overwhelming.  They hit so hard it hurt.  Overwhelming emotions you could just drown in.  I felt every single thing the girls felt.  Yes, this book will shock you, scare you and touch you more than you ever thought possible.  You will be so overwhelmed by emotions – hate, fear, pain, love, hope – that you will think you are about to drown in it all.  And you will love Every. Single. Second.
Scary vampires are fun and I can deal with, because they’re not real.  But Black Heart Blue… I knew that somewhere, maybe nearer than I’d like to think, this was happening to someone.  A girl getting hit by her father, mother, a boy being beaten, a house suffocating with fear.  This is why books such as this are worse than any kind of horror story.  They’re the real horror stories…
With a house controlled by an abusive father and two girls trying desperately to escape, Black Heart Blue was a book that broke my heart while making me hope til it hurt.  This was one of the most powerful books I’ve ever read; a book that left me breathless and shaken up inside.  I still haven’t gotten it out of my head.  I’m not sure if I’ll ever get it out of my head.  Louisa Reid wrote a stunning debut that I’ll never forget.  I honestly can’t recommend this book enough.
Beautiful.  Horrible.  Unforgettable.  I don’t think I’ll ever forget this story.  Ever.

Read this book if you liked:
Kill All Enemies by Melvin Burgess
Heart-Shaped Bruise by Tanya Byrne
Before I Die by Jenny Downham


Happy Reading
Megan
* This book was received from Penguin in exchange for an honest review
Posted by TheBookAddictedGirl at 08:15

Emotions you could drown in...omg this sounds good! Thanks for sharing it!

Kimba: It really, really was!! I can't recommend it enough if I'm honest!

I was intrigued by the synopsis, and now I'm convinced by your review that I have to read this! It's definitely true that you know you've read an amazing book when you finish it and you feel like you've absorbed it into you and can't stop thinking about it.

Really enjoyed this book, liked the way many events had both sisters views, their complex relationship with so many secrets.

Iv read this book a few times since I was 12 years old,I’m not much of a bookworm but this book is by far the best book I have ever read.