The Man Who Was Thursday by G.K. Chesterton 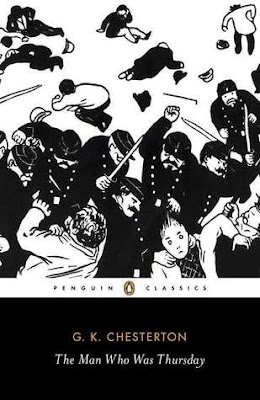 “We dig deeper and we blow you higher.  We wish to deny all those arbitrary distinctions of vice and virtue, honour and treachery, upon which mere rebels base themselves.”
The Central Anarchist Council is a secret society sworn to destroy the world.  The council is governed by seven men, who hide their identities behind the names of the days of the week.  Yet one of their number – Thursday – is not the revolutionary he claims to be, but a Scotland Yard detective.  And, the question soon becomes, who and what are the others?  G.K. Chesterton unravels this unique fantasy in his own inventive and exuberant way, and uses this nightmare of paradox and surprise to probe the mysteries of human behaviour and belief.
Matthew Beaumont’s introduction examines the book’s themes of identity and confrontation, and explores its intriguing title.  This edition also contains a chronology, notes and suggested further reading. 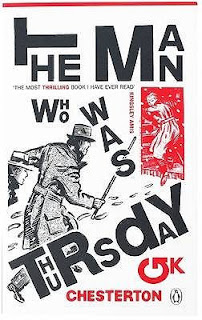 Review:
"I am a destroyer.  I would destroy the world if I could."
Our story begins with two poets.  Lucian Gregory argues that an artist is an anarchist and vice versa.  Gabriel Syme just as emphatically argues otherwise.
Which do you believe?
The New Anarchists are dedicated to changing the world.  To stay hidden, they are highly, highly secretive.
But, pride can eclipse secrecy, as one undercover detective discovers.
The detective becomes Thursday, one of the seven most powerful men in the group.
Now, the detective knows who and what he is – definitely not an anarchist, that's for sure.
But who are these six men who hide behind days of the week?
Who is the all-powerful and mysterious Sunday, the man in charge of them all?  And can the anti-anarchist detective shut down the New Anarchists - before they manage to end the world?
This book has such an unusual name.   The Man Who Was Thursday.  Weird, right?  I mean, how can a guy be a day of the week.  It's got to be a typo, doesn't it?  But it isn't.  And the story got more and more mad from there.  It was definitely a gripping read, one that kept me hooked.  But the plot gave me a wee bit of a headache: the language was very complex and Dickens-esque, very good for visualisation but with loads of references I'm pretty sure went over my head.  I think it's a book I need to read a few times before I get its full effect.  Nonetheless, I did enjoy it. 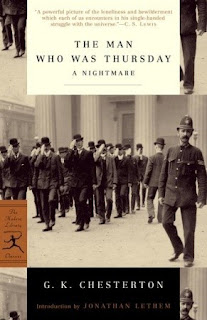 Chesterton's characters were all so wonderfully written – so weird and varying and real. All of them could be mentioned and I'd love to ramble about them, but I can't, just in case I give anything away.  But I will say all are intriguing and not at all what you first expect them to be.  As for Thursday, he was a sneaky one, that's for sure.  He was so clever and analytical and intuitive.  He was just a very likeable sorta character.  He was also totally and utterly off his freaking rocker.
On second thought, I will also mention the head of the anarchists.  I mention him why, you make ask.  Well, I mention him because he scared the heebie-jeebies outta me.  I think it was because he was constantly made out to appear as a godlike figure that got to me...  Or maybe just cause we had no idea who he was.
As I said, the writing was very Dickensian – super detailed so you could see everything.  I liked how lyrical it was but sometimes it felt a little bit heavy.  I really liked the witty banter between the characters, even though much of it was very wordy.  But the visualisation was intense, amazing.  The plot was so complex and twisty.  Much of it was completely nonsensical - a dream: a really freaking weird dream.  It was also really fast paced and addictive, but parts made no real sense.  It seemed to get more bizarre as the plot went on – and more addictive too.  The end?  Well.  Weird.  Really, really odd actually... 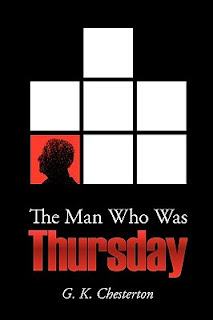 And it's kind of shocking how relevant the events in this book are, even today.  Anarchists, religious fanatics doing horrible things in the name of someone holy, bombings, terrorists.  Admittedly, the New Anarchists were hard-core - no mind games or disruptions for them.  Oh no, blowing things up, killing, dynamite stuff.  Basically, anything violent.  They were driven by personal beliefs.  Much like today.
I'm pretty sure much of the book's themes and messages went over my head.  There were loads of religious and mythical messages - like, loads of them.  It's the sorta book you can imagine being picked to pieces in A Level English Lit – the kind of book you pick and pick and pick at.  Because this isn't an easy book.  It's heavy - the kind of book you probably need to read a few times to really understand everything and let it sink in.
The Man Who Was Thursday was a brilliant and bizarre book.  Almost as confusing as it was compelling, I sped through the book.  It was definitely surreal but was also exciting and addictive too.  I will read it again sometime soon – maybe when I'm not reading to find the answers to the plot I'll get a fuller experience of the book.  Maybe it will even be one of my favourite classics.  For now, I'll say a barmy but thrilling spy-ish book that had me guessing to the end.

Read this book if you liked:
Slaughterhouse 5 by Kurt Vonnegut
The Secret Agent by Joseph Conrad
Sherlock Holmes by Sir Arthur Conan Doyle


Happy Reading
Megan
* This book was received from Spinebreakers in exchange for an honest review
Posted by TheBookAddictedGirl at 05:32