Jack of Hearts (And Other Parts) by L.C. Rosen 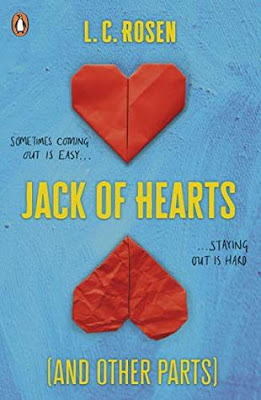 
Blurb From Goodreads:
Couldn't get enough of Love, Simon or The Gentleman's Guide to Vice and Virtue?
This is the (slightly NSFW) book for you!
---------------
'My first time getting it in the butt was kind of weird. I think it's going to be weird for everyone's first time, though.'
Meet Jack Rothman. He's seventeen and loves partying, makeup and boys - sometimes all at the same time.
His sex life makes him the hot topic for the high school gossip machine. But who cares? Like Jack always says, 'it could be worse'.
He doesn't actually expect that to come true.
But after Jack starts writing an online sex advice column, the mysterious love letters he's been getting take a turn for the creepy.
Jack's secret admirer knows everything: where he's hanging out, who he's sleeping with, who his mum is dating.
They claim they love Jack, but not his unashamedly queer lifestyle. They need him to curb his sexuality, or they'll force him.
As the pressure mounts, Jack must unmask his stalker before their obsession becomes genuinely dangerous...

Review:
Jack Rothman is kind of notorious in his school.  He likes sex, you see.  A lot.  And partying.  The number of guys he’s slept with always a source of gossip – which is a bit awkward, but Jack can deal.
Until he starts writing a sex advice column for his friend’s website.  And the love notes he’d been receiving turn into threatening emails...
Someone is stalking him and judging him.  They don’t approve of Jack’s promiscuity and want him for themselves.
Jack and his friends have to discover his stalker – before he carries out his threats...
I knew about this book like a year before I got my greedy hands on an ARC copy.  I’ve been desperate to read it since I heard about it.  And yet when I finally got it, I was too busy!  So when I got a break over the Christmas holidays, I happily dove straight into Jack of Hearts.  I devoured two thirds of the book in an evening, reading until 2am when my eyes began to get heavy.  This book... is awesome.  Seriously just brilliant.  It’s bold and brave and glittery – it tackles serious issues like stalking, bullying, homophobia and stereotypes without ever feeling heavy or preachy.  It was hilarious and sassy and scary and I just loved this rollercoaster of a read.  I really didn’t want it to end!
Jack I just adored.  He is utterly unashamed of his love of sex, bold in his fashion choices and his eye make-up slays everything.  He’s so strong and it honestly hurt to see him become so broken by the stalker’s actions!  I really wanted to hug him and protect him from all the bigots in the world – but Jack needed no protection!  He’s totally fierce and someone all kids – gay, bi, straight, asexual, all the letters of the rainbow – need to read about.
I also loved Jenna – best girl friend and ally ever.  She was so strong and fierce and I adored her.  Ben was the cutest bean ever – my little romantic fashion geek, I just wanted to wrap him up in fabulous blankets and hug him!  Basically, the two of them were the best best friends ever, period. 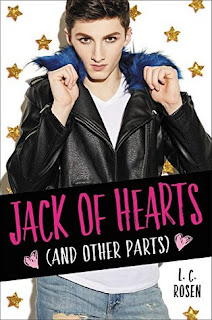 I also adored Jack’s mum – who was just t he coolest ever.  She was totally open-minded and supportive of Jack and I just loved that.
So, Rosen really didn’t shy away from sex details!  This book is kind of an LGBTQ+ sex-ed lesson – in the best possible way.  It tells you everything you could want to know as a gay teen thinking about sex – and everything they really ought to teach you in school.  It’s fun and informative and not at all preachy – it’s totally like an advice column.  It concentrates on the fun of sex – and the less fun bits that you should be aware of.  And it was brilliant – I haven’t read a sex-ed book this brilliant since Dawson’s This Book Is Gay and I’m pretty sure Jack of Hearts pips This Book Is Gay to the sex-ed trophy of the year prize.  This comparison has become awfully unwieldy so I think it’s time to move on.
But really, Jack of Hearts manages to make you question so much about heteronormativity and homophobia without you even realising.  You’re reading about this boy who is gay and enjoying life, having sex and then is being bullied.  More than anything, it’s the reaction of the principal that made my blood just boil over.  So many people claim to be ‘supportive’ of LGBTQ+ people and just aren’t when it comes down to it and that’s just not ok.  It’s not ok to judge someone because of their sexuality or their skin colour or their sexual habits – Jack is terrified of going to the police because he’s sure they’ll just see him as a “slut” and won’t do anything.  And that’s just not ok.  There is so much wrong with the world and it’s only with books like this that things can change for the better.
I’m making this sound so heavy, but honestly it isn’t.  Yes, the bullying storyline is a big part of the story.  But it somehow doesn’t overshadow Jack’s brilliant personality, his friends’ antics, the humour in the story.  Everything is just done so cleverly that this book manages to tackle some big issues without crushing you under their weight.
I really need to stop with the metaphors.
Seriously, though.  Read Jack of Hearts.  It’s honestly one of the best LGBTQ+ things I’ve read and I seriously think it may just be a favourite of mine in 2019.  It’s so unapologetic in its queerness and the sexual details it includes are so honest and real.  It’s like a breath of fresh air, honestly.  It’s an ‘eff you’ to everyone who thinks stereotyping is ok, that doing nothing is better than encouraging shaming of any kind, that it’s ok in this day and age to be a homophobic dickhead.  As someone who is bi and has a bunch of LGBTQ+ friends, I honestly just can’t recommend this book enough.  We need more books like this!  Please give me more books like this.  It’s the kind of book you finish reading grinning, just thinking ‘Can I get an amen?’ to yourself, because preach.
Also.  If you get my reference there, I love you.
And please read Jack of Hearts.
Ok, bye.  I need to go shove this book at some people because the word must be spread!

Read this book if you liked:
Simon Vs The Homo Sapiens Agenda by Becky Albertalli
This Book Is Gay by Juno Dawson
The Gentleman’s Guide to Vice and Virtue by Mackenzi Lee


Happy Reading
Megan
* This book was received from Penguin in exchange for an honest review
** Quotes used are from a proof copy and may have been changed in the finished book
Posted by TheBookAddictedGirl at 08:10

Email ThisBlogThis!Share to TwitterShare to FacebookShare to Pinterest
Labels: 14+, 5 Stars, ARC, Coming-of-Age, Contemporary, For Review, Jack of Hearts, Jack of Hearts (And Other Parts), L.C. Rosen, Mystery, Romance, YA

hi i should pots one information just click here.