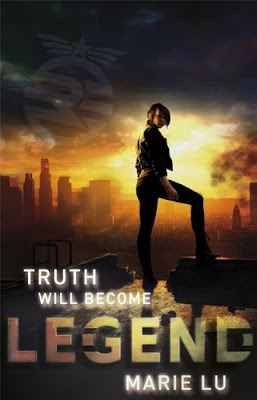 Series: Legend Trilogy, Book One
Publisher: Puffin
Format: ARC
Published: 2nd February 2012
Book: For Review*
Genre: Dystiopian, Science-Fiction, Action-Adventure, Mystery, Romance, Thriller-Suspense, YA
Recommended Age: 12+
Contains: Violence, Death
No Alcohol, Drug References
Author's Site: Marie Lu
Los Angeles, California
Republic of America
He is Day.
The boy who walks in the light.
She is June.
The girl who seeks her brother’s killer.
On the run and undercover, they meet by chance.  Irresistibly drawn together, neither knows the other’s past.
But Day murdered June’s brother.
And she has sworn to avenge his death.

Review:
Day is the most wanted person in the Republic.  June is the Republic’s prodigy, on a mission to find her brother’s killer.
Day.
Undercover, the two meet, oblivious to the other’s identity.  Against all the odds, they start to fall in love.  But June has promised her brother that she will avenge his death.
When the truth is revealed and both of their worlds begin to crumble, will these two teenagers be able to put aside their differences and fight to say alive?
Now, I recently have read a lot of dystopian books.  And, boy, did I have high expectations of Legend!  And you know what?  It lived up to them all.  There was a totally epic and wonderfully thought-out world (which was also terrifying), a strong heroine, a swoon-worthy hero, a totally believable love story and a huge web of lies.  In my eyes, this not only equals great dystopian, it equals just all-round great book!  Marie Lu, I can’t wait to see what you bring out next!
Day was a legend in Los Angeles – everyone knew his name.  He was sweet: he had to know his family as safe and he really, really cared for and loved Tess.   A worryingly good actor, he was brave, adventurous, rather reckless and was able of doing the impossible.  I loved that he was snarky, loud-mouthed and clever, and just as observational as June.  As for why he chose the name “Day”, oh it just made me love him even more!
June Iparis, aged fifteen, was “the Republic’s favourite little prodigy”.  But instead of being all goody-goody, she was cheeky, mildly rebellious and often in trouble!  The way she saw and noticed everything really reminded me of Sherlock Holmes: a freakin’ deduction genius!  But despite the rebellious streak, she was devoted to the Republic: the perfect soldier.  She was just a good person who has been fed lies all her life.  She was also snarky, confident, funny and strong, and absolutely doted on her brother.  I couldn’t help loving the crazy, reckless, kick-butt genius!
The other characters were amazing, and equally well padded out, in my opinion.  Tess, who hung with Day, was so sweet.  It was obvious she adored Day, and her fragility just made her so loveable to me.  Captain Metias Iparis, June’s big brother and guardian: he was just so lovely, always there for “Junebug”!  He was a really good person, one I fell in love with the moment I met him!  There was Captain Thomas, a soldier, who I started of liking, until I slowly saw the real person inside.  Commander Jameson, stern, strict, ruthless, the Republic’s lackey.  Day’s brother John, so loving and warm and protective of his little brothers: even though he wasn’t in it much, I loved him too.
The relationship between Day and June was brilliantly done – neither knew who the other was, and yet I could feel the history, the chemistry.  Even when they both found out who the other was, they couldn’t help the feelings.  And they were alike in so many ways, so it was no secret why they should like each other.  They had the same talents.  That’s why June was sent.  The Republic knew they thought alike.  They knew June would get Day, given a motive.  People have complained about their similarities, but I would’ve thought that after reading the book it would have made sense.  Or maybe it’s only in my (very twisted) mind that all the pieces clicked.  For me, the similarities, shared gifts and traits were a MUST.  Plus, none of the other events would have been possible otherwise.
I, in a twisted way, love dystopian worlds.  They all haves some parallels with our world, often exaggerating the extreme wealth and poverty.  And this world? So, so epic!  I loved how it was all described, how it was controlled and how everything was explained.  The pretence covered the terrible truth without a single fault.  Lu just wove the most amazing society, terrifying and amazing.
And the writing was amazing!  It kept me on the edge of my seat.  I was totally immersed in the world and story.  There was enough description so I saw everything, it not enough to make it boring in the slightest.  I really got into Day and June’s heads; fell in love with both of them.  More, Lu’s writing was addictive and exciting, and before I knew it, I had finished the book.  Amazing!
I loved the plot of Legend.  The twists and turns.  The way the romance happened.  The way the truth came out, the way… Well, how more or less everything happened.  There were, of course, aspects from the beginning I suspected would happen – this is a dystopian world, after all, and everything tends to kick off in similar ways.  But some I didn’t see some things coming at all.  And whether I guessed the plot parts or not, I loved every second – I simply cannot wait to see where Book Two takes us!
A prodigy, genius girl, a master criminal boy and a Republic with more secrets than citizens, Legend was a brilliant story that had me hooked from start to finish.  I can’t wait for the next book in the series!
Star Rating:
4½ Out of 5

Read this book if you liked:
Delirium by Lauren Oliver
The Hunger Games by Suzanne Collins
Divergent by Veronica Ross
The Mortal Instruments by Cassandra Clare
Challenges It's Taking Part In:
100 Books in a Year Reading Challenge 2012 (Hosted by Book Chick City)
Happy Reading
Megan
* This book was received from Puffin in exchange for an honest review
Number of Pages: 304
Posted by TheBookAddictedGirl at 09:51

Thank you for the awesome review! This book is currently on my TBR pile, but I can't wait to read it after reading your review! I love this kind of story! :)