Alice in the Spotlight by Chris Higgins 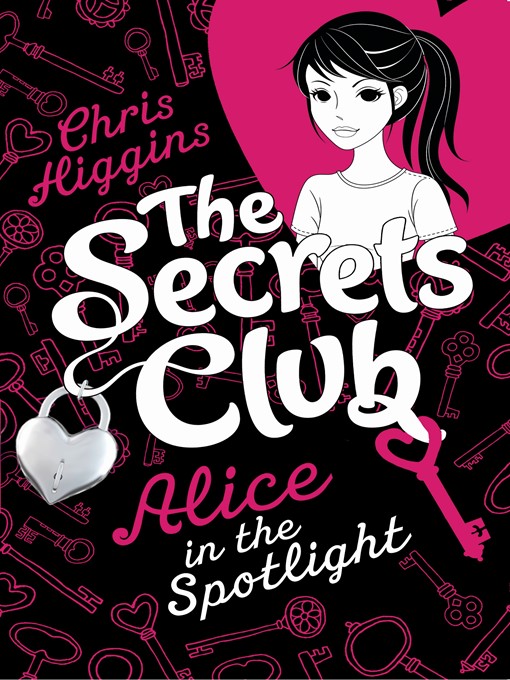 ‘“It’s ok.  We’re the Gang of Four, remember?  The No-Secrets Club.”  Tash’s stern face softens into her familiar smile and my world lights up again.  Briefly.
‘But soon the cloud comes back.
‘I have got a secret.
‘A BIG ONE.
‘I want to tell my friends, I really do.  But the longer I keep it hidden the harder it is to do…’

Join Alice and the girls in the Secrets Club series as they begin their new lives at Riverside Academy, making friends, facing their fears and choosing which secrets they share…

Review:
Alice has just started high school - a posh high school none of her friends are going to.  On her first day, her father yells at another student's mum, swears at the headmistress and acts an awful lot like Alice's irresponsible party-girl big sister, Nikki.
It's at Riverside Academy, though, that Alice finds a group of new best friends.  Alice, Lissa, Dani and Tash are all totally different but they soon become best friends - the "Gang of Four".
So when one day they vow to keep no secrets, Alice's heart falls.
She's keeping something back, something locked away in her head.
She wants to tell her new friends, but she vowed to herself she would let no one find out...
But is Alice the only girl in the "No-Secrets Club" keeping something to herself?
I've never read anything by Chris Higgins before, but Jayde (a lovely lady at Penguin, who sent me this wonderful book) said she thought I'd like it, so I happily picked it up.  I'll admit that 8+ is a little younger than most of my books, but I soon found myself wrapped up in the story.  It was a really quick read and a really fun one too.  Something about the book just sucked me in and kept me there.  I read it in a single sitting!  It was so addictive!  It was like being an 11 year old all over again, though I must admit, Alice's experience was rather more exciting!
I loved the huge variety of characters in this book: I really think there's a girl everyone could relate to.  I loved how Higgins showed them all - they all had strengths and flaws.  They're the kind of girls I think Tweens will really be able to relate to.  Alice was really smart and practical and careful: the sort of person who thought through the possibilities before doing something.  I loved her, and how devoted she was to the environment!  Alice’s sister Nikki was brilliant: impulsive and a party lover, she was kind of a wild cannon, but I liked her and the sister-bond between her and Alice.  Lissa was super posh and glamorous and nice, and although she was really together on the outside, she was really quite insecure underneath the surface.  I’m really intrigued by her secret…  Tash was warm and sweet and smiley: totally confident and great fun.  She loved school and was a really bubbly person.  Dani was a tomboy and totally devastated she was at an all-girls school!  I loved that she was her own person with her own mind.  I’ve just gotta mention Nikki’s boyfriend Greg, ‘cause not only was he hot, but he was cute and kind and sweet, too.
The family relationships were really varying throughout the book.  The one between Lissa and her Mum was pretty strained and I could tell Tash's mum relied on her a lot.  The rather stormy family Alice had was the one at the heart of the book.  Alice's mum and dad were always worrying about Nikki, 'cause she partied a lot and got into trouble.  But they obviously all loved each other, even though they wound one another up and drove each other crazy.
This book brilliantly tackled how scary it can be, going up to high school.  I remember how terrifying it was for me - I was so scared that I wouldn't know anyone in my form.  (I ended up in the same one as my best friend and at least five kids from my school!)  So can you imagine how terrifying it would be to go to a school no one you know was going to!  As well as that, it dealt with secrets and trying to fit in and how you grow up and change.  All of the things covered are really relevant and will really just click with teens and pre-teens.
Alice had kind of a dry humour in her voice, making the book a real pleasure and great fun to read.  While it really sounded like an eleven-year-old, sometimes Alice sounded a little too old, but she was a “thinker” and it just suited her.  I'll admit that I had an inkling on where everything was going, the 'big secret', pretty early on, but then this is aimed at eight year olds, so what so you expect?  None the less, I was simply addicted to the book and plot.  I'm not all that sure what exactly it was about the book, but I was sucked right into the head of Alice, feeling like an eleven year old again.  With all the secrets and mystery, this book had a plot that kids will love just as much as I did!  Also, I couldn't figure out some of the other girls' secrets, so I'm desperate to find out what they are hiding too!
Ok, so this book was aimed at a lower age group then most I read.  But I loved it!  It was fun, funny, addictive and such a short, sweet read.  I was left wanting more!  It's going to be a huge hit with all pre-teen girls - and after-teen gals too!  I can't wait for the next in the series and will definitely be checking out some of Higgin's other books!  Yay to the (No) Secrets Club!
Alrighty, Alice often did little lists like this, so I’m going to do one about: Reasons to love this book:


Oh, and totally off topic, I loved the little keyholes at the start of the chapters and the cute little keys at the end of them.  They were totally cute!  And tied in with the whole secret thing perfectly.


Happy Reading
Megan
* This book was received from Penguin in exchange for an honest review
Posted by TheBookAddictedGirl at 03:58

Email ThisBlogThis!Share to TwitterShare to FacebookShare to Pinterest
Labels: 4½ Stars, Alice in the Spotlight, Chris Higgins, Contemporary, For Review, Realistic-Fiction, YA, YA-Child Crossover

I haven't read a Chris Higgins book in ages, and this looks really good. I love the sound of a Secret Club! And the cover is so cute, I agree;) Thanks for posting! :) x

LOVE IT!
Great review. Can I just ask?
How come you manage to get so many ARC's?
I never get any! :(

Zoe: It's a great little book! And I just can't resist that adorable cover!
Ebony: Thank you! Well, I've been blogging about a year and a half - it took me a long time to get sent books! Just keep blogging and it will happen. :)