The Power of Six by Pittacus Lore 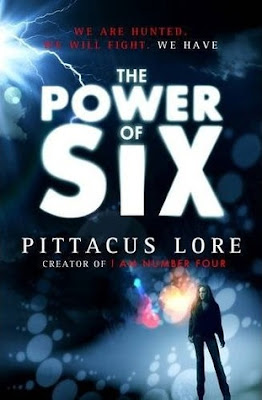 I’ve seen him on the news.
John Smith, out there, on the run.  To the world, he’s a mystery.  To me… he’s one of us.
Nine of us came here to Earth.  There are six of us left.
Is Hogn Number Fiour, and is his appearance the sign I’ve been waiting for?
And what about Number Five and Six?
They
Caught Number One In Malaysia.
Number Two In England.
And Number Three In Kenya.
They Tried To Catch Number Four In Ohio – And Failed.
I am Number Seven.  One of the six still alive.
And I am ready to fight.

Review:
Seven has been living in a convent for years. She wants to keep moving, keep hiding, but her Cêpan seems to have forgotten about their mission. So instead, Seven just follows the news on John Smith, the boy everyone believes to be a terrorist, but she believes is one of them. She is right.
Number Four, AKA John Smith, is on the run - both from the cops and the Mogdorians, the evil alien race who destroyed his home planet Lorien and is determined to kill the remaining six children too.
Can Seven remain hidden and find her way to John and the others? Can Four, Six and Sam keep ahead of those pursuing them?
Is the Power of Six strong enough to destroy all of the Mogdorians?
Whatever happens next, they will all fight to the death for their planet...
I loved I Am Number Four – it’s one of my favourite Sci-Fi books ever!  And The Power of Six did not disappoint me!  I was hooked to every page and loved all the new characters, the new feel they gave to the book.  I fell in love with the action-packed-ness of I Am Number Four, and it was even more compelling in this one!  Man, I am just ridiculously in love with this series.  And even more desperate for the next book - The Rise Of Nine!

All the characters were amazing and so real!  I loved them all – especially the newbies, as they added a new and awesome feel to the book.  Number Seven, or Marina, was a brilliant addition: determined, sweet, with a fighting spirit like no other.  She was so, so caring – she’d do anything for the ones she loves.  And her powers?  So awesome!  I’ve always loved Four, and he was still sweet and totally devoted to his friends, but in this one he was a little too reckless.  Then again, what makes him loveable and believable is his flaws and the fact he isn’t perfect.  Plus, I love his strength and how he makes me laugh!  Six was only in the end of the first book, but she was huge in this.  And she is so kick-butt awesome!  What do you need?  Stitches?  Awesome powers?  Secrets leading to intrigue?  Invisibility?!  Oh, just ask Six!  How I love her!  But Sam is definitely my favourite.  He’s just so cute and nerdy and funny, so sweet and brave and clever. Gotta love him!
The bond between Sam, Six and Four really developed in this one and I could really feel their friendship.  Even though both guys were kinda crushin' on Six.  I did and do like Sarah, but she just can't compete.  Six is kick butt awesome and I just love her. She's a way better love interest for anyone if you ask me.  So, yes, can’t wait to see where this one goes!
Man, I love ‘Pittacus Lore’.  He just blows me away.  For starters, the plot: amazing.  Action-packed, twisty, addictive.  Even if some scenes were slower than others, I loved them anyway because of the mystery in them, the sense of purpose.  And then halfway through, bam!  The pace just kicked up and went full throttle, and there was just so much action and suspense – two of my very favourite things!  But even with all the action, there was just so much emotion.  The bond between Sam, Six and Four.  The loss of loved ones.  The way the characters loved.  We got to see stories from the past and all the powerful emotions of love and grief that came with them. I just love that such an action-packed book about alien races can have so much heart, so much soul, so many human emotions.  Oh, and then there was the writing, alternating between Four and Seven: yes, split POVs!  Both sounded very different and both had the same addictiveness.  I loved getting to see what life was like for one of the other Nine.  As for the world – or more precisely, the alien worlds – well, let’s just say I wanna be a Lorien.  Enough said!
An action-packed, addictive, romantic, scary-awesome book with the most amazing characters and world... I seriously love this series and book - I wasn’t bored for a second ever!  And I so need the next book!  And for this one to be made into a film - because it was epic!  I seriously need the next in the series!  It's gonna be even more awesome!

Read this book if you liked:
The Mortal Instruments by Cassandra Clare
Earthfall by Mark Walden
Virals by Kathy Reichs

Challenges It's Taking Part In:
100 Books in a Year Reading Challenge 2012 (Hosted by Book Chick City)
Happy Reading
Megan
* This book was received from Penguin in exchange for an honest review
Posted by TheBookAddictedGirl at 09:56

I really liked I Am Number Four so I am quite keen on getting this, it looks awesome. Thanks for posting and great review! :)

I have I Am Number Four sitting on my shelf just waiting to be read, and after reading your review I'm ready to make it my very next read!