The Vampire Fighters by Pete Johnson 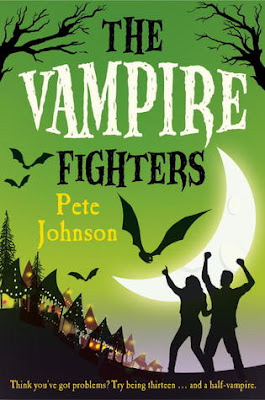 Marcus, Tallulah and Gracie are back in the final fast-paced, fun and frightening story of award-winning Pete Johnson's vampire series.
Life has never been more complicated for thirteen-year-old Marcus. It's not easy trying to hide your secret identity as a half-vampire, avoid garlic at all costs, AND work up the courage to ask a girl out. Especially when that girl is vampire-crazy Tallulah.
Plus, Marcus's parents are still convinced his special power is going to arrive any day now. And they're trying not to show their disappointment every time another day passes and it doesn't appear -- but Marcus is totally feeling the pressure.
As if that wasn't bad enough, a seriously creepy Winter Fair has arrived in town -- and a number of terrifying attacks have started happening. Giles believes a super-evil sect of Deadly Vampires is behind them, and Marcus suspects an eerie ventriloquist at the Fair.
All Marcus wants is an easy life. But now it's up to him to save the day.

Review
Since becoming a half-vampire, Marcus has been poisoned by pizza, faced down a deadly vampire once or twice and had a sudden blood craving in the middle of a date.
What with all that drama, the pressure of keeping his identity as a half-vampire secret, trying to get up the courage to ask out moody, vampire-obsessed Tallulah and dealing with his parents never ending hope (and disappointment) as they wait for the special (and very rare) power he's meant to develop to come.
Oh, and there's also the so-called "Blood Ghost", which is another "Deadly Vampire" - AKA, a human killing, super strong vampire.  Eek!
And there's a chance there might be more of the Deadly Vampires on the way...
So much for being normal!
Oh, this series just keeps on getting better and better!  It's funny, mad, addictive, fun!  I do love a good vamp story, and while this isn't a teen book, I loved it!  It's just so funny and addictive and unique, thanks to the spin Johnson's put on vamp mythology.  I know kids will love this one and the others in the series - they're so much fun and excellent for reluctant readers!  While there are a few little details that bugged me (how Marcus blogs, where vamps come from) they didn't take away my enjoyment at all.  Or make me any less sad that this is the last in the series - I'll miss Marcus so much!
I loved all the characters in this book!  There was a character personality for everyone to love and loads of characters for kids to relate to as well.  Marcus was brilliant: he made me laugh so much and was totally off his rocker – in the best possible way!  He had a mad and snarky remark for everything - literally!  And I loved how real and relatable he was - sure, he was funny and confident, but he was also flawed as he had fears and girl troubles.  I think kids will really be able to relate with him and his situation - well, half-vamp thing aside!  Gracie, the other-half vamp, was my favourite girl lead in the book.  Cheeky, funny, bubbly Gracie was just perfect, especially with Marcus.  Tallulah was so vampire-obsessed it’s scary.  Her bluntness and spookiness was funny, though.  I also thought both Marcus' parents and Tara, a half-vamp mentor, were brilliant.  The bad guy was great too - and super creepy!
As always, just lovin' the blog layout: Johnsnon’s writing is so funny and witty!  But sometimes I wondered how Marcus managed to write some of the posts while he surely must have been in the middle of all the action.  Sure, he had an iPod, but still...  Now, the plot for this one was the best if the series, if you ask me!  Twistier, faster paced, more action, more mystery...  It was all so awesome and addictive!  I'll admit that one of the twists may have been a little far-fetched, but I just loved this book so much.  The ending was just stunning and left me desperate for more!  But it was also kinda perfect.
And I seriously love the vamp mythology!  It's just so hilarious!  The only thing I'd wish for is to know more about where vamps and half-vamps came from.  Sure, we know they're related somehow but how did they come about?!
The Vampire Fighters is ridiculously addictive and dangerous.  What with the short blog posts, non-stop humour and fast pace, no kid will be able to put it down - they'll feel just as hooked as I was!  It isn't a thought provoking or complex read - it's funny, light and action-packed.  The series has been so much fun to read and I'm seriously sad that there won't be another!  It's such great fun and I laughed out loud a lot.  And oh how I shall miss Marcus and Gracie and Tallulah!  For reluctant readers and obsessive readers alike, The Vampire Fighters will just appeal to them all!
With a witty and reluctant half-vampire lead, deadly vampires in the loose and a race to stop them, The Vampire Fighters definitely ensures that the series goes out with one heck of a bang!  I can't wait to read another Pete Johnson book, though I'm not sure if it will be the same without Marcus!

Read this book if you liked:
The Vampire Blog Series by Pete Johnson
The Saga of Darren Shan by Darren Shan
Dark Lord by Jamie Thompson


Happy Reading
Megan
* This book was received from RandomHouse in exchange for an honest review
Posted by TheBookAddictedGirl at 00:30

Vampires is not at all like in the movies or books. Sure, I understand. You are young you have the whole world open to you. You can be anything that you choose if you apply yourself and try hard to work toward that goal. But being a Vampire is not what it seems like. It’s a life full of good, and amazing things. We are as human as you are.. It’s not what you are that counts, But how you choose to be. Do you want a life full of interesting things? Do you want to have power and influence over others? To be charming and desirable? To have wealth, health, and longevity? contact the Vampires Lord on his Email: richvampirekindom@gmail.com

Are you tired of being human, having talented brain turning to a vampire in a good posture in ten minutes, Do you want to have power and influence over others, To be charming and desirable, To have wealth, health, without delaying in a good human posture and becoming an immortal? If yes, these your chance. It's a world of vampire where life get easier,We have made so many persons vampires and have turned them rich, You will assured long life and prosperity, You shall be made to be very sensitive to mental alertness, Stronger and also very fast, You will not be restricted to walking at night only even at the very middle of broad day light you will be made to walk, This is an opportunity to have the human vampire virus to perform in a good posture. If you are interested contact us on Vampirelord7878@gmail.com