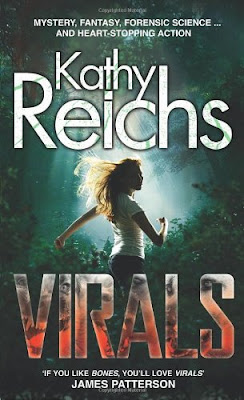 Kathy Reichs takes forensics to a new level…
Tory Brennan is as fascinated by bones and dead bodies as her famous aunt, acclaimed forensic anthropologist Tempe Brennan.  However, living on a secluded island off Charleston in South Carolina, she doesn’t have much opportunity to put her knowledge to the test.  Until she and her group of technophile friends stumble across a shallow grave containing the remains of a girl who has been missing for thirty years.
With the cold-case murder suddenly hot, Tory realises they are involved in something fatally dangerous.  And when they rescue a sick dog from a laboratory on the same island, it becomes evident that somehow the two events are linked.

On the run from forces they don’t understand, they have only each other to fall back on.  Until they succumb to a mysterious infection that heightens their senses and hones their instincts to impossible levels.  Their illness seems to have changed their very biology – and suddenly it’s clear that the island is home to something well beyond their comprehension.  It’s a secret that has driven men to kill once.  And will dive them to kill again…

Review:
Six months ago, tragedy struck fourteen-year-old Tory Brennan.  Her mum died.  She moved in with her father – the father she has never met and who didn’t even know she existed.  They moved to Morris Island for his work.  There, Tory met Hi, Ben and Shelton, and the gang soon become friends, doing everything together.  But when they stumble across a skeleton in the restricted part of Loggerhead Island and rescue a sick puppy from the research institute, everything changes.  Now they have people after them, who want to keep the skeleton’s cold-case-murder just that – cold.
And then, once more, it gets worse.  Suddenly… they have abilities.  With unknown forces hunting them down, Tory, Hi, Ben and Shelton only have one another and their new gifts.
But where did they come from?  And what is going on at Loggerhead?  Who’s after them?  Can they stay alive long enough to find out…?

I love Bones the TV show, though I’ve never actually read anything by Reichs before.  When I saw this, a sci-fi book, written by the lady behind one of my favorite shows, I just couldn’t resist!  Virals was a book that sucked me in: Tory’s snark and the group dynamics were perfect and just made me want to read on.  A brilliant, twisty, sci-fi mystery that I was just addicted to.  I loved it!  And thank God I have Seizure already!
The characters…  I loved them all!  They all felt so real, so loveable, so alive.   And they were all so relatable – they were the odd-ones-out at their school, even before the “incident”.  Their dynamics were excellent: teasing, tight, loads of sarcasm, completely hilarious.  I loved them all!  Tory was great: funny, kinda nerdy, pure genius and just all-round loveable.  I loved her snark and how she exaggerated: she always managed to make me laugh!  Plus, she was just completely and utterly, wonderfully insane – something I love in my characters!  Hi was also bonkers: he was hilarious and "the master of sarcasm".  Clever, logical and an evil genius, the hilarious Hi was my personal favorite!  Ben was a straight-to-the-point kinda guy, though. At one point, I was undecided about whether Ben looked out for himself first, or if he was just a really, really good hider... Either way, he was a man of little words - and the ones he said were usually snarky. Brilliant!  Shelton Devers, mechanic extraordinaire and whiz at all things technical, he too was a master of sarcasm (d’you see a pattern here?). He had a strange repertoire of skills (such as lock-picking) and a fear of creepy crawlies... I loved him as well!

The writing was brilliant - told primarily in Tory's 1st person, but with bits in 3rd person, revolving around the 'bad guys' and what they were up to, an extra little insight I adored.  I loved Tory's voice: it was both super teen and super intelligent (she is a freakin’ genius!).  The description was vivid – I saw everything – and not at all dull, not even for a moment.  Overall, the writing was addictive, engrossing and brilliant - there were so many little hints that drove me insane, even though sometimes I thought there were too many...  And the plot was awesome, full of twists and mystery and it had me hooked onto every single word.  The mystery was intriguing, the excitement addictive and the humor intoxicating: it was just amazing!  The perfect voice, the perfect characters, the perfect plot.  And also, the perfect, flawless blend of science and paranormal.  Reichs is a genius and I so wanna be a Viral!
With a snarky, witty heroine, her genius group of friends, a sick puppy, strange powers, a secret experiment and an unknown enemy, Virals was addictive, exciting and pure awesome!  Think Famous Five with a wolfdog, superpowers, forensic science and murder - yes, I'd take Virals over Famous Five anyday!  There are not enough mystery-forensic-paranormal books out there – but after Virals, I’m desperate for more!
And now I need more of the Virals!
I shall end with a quote from Miss Tory herself: “God help anyone who messes with the Virals”...

Challenges It's Taking Part In:
100 Books in a Year Reading Challenge 2012 (Hosted by Book Chick City)
Happy Reading
Megan
Posted by TheBookAddictedGirl at 06:17

Fantastic review! This looks brilliant, I have to get round to reading it soon :) Hi sounds like a great character - and I love his name! :)

I definitely agree with you - Virals is AMAZING :D You need to read Seizure soon, it is even better.
And Hi is my favourite character too ;)
Great review, Megan! x