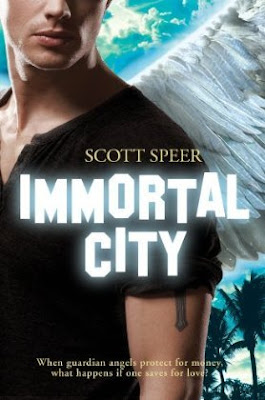 Series: Immortal City, Book One
Publisher: Scholastic
Format: ARC
Published: 5th April 2012
Number of Pages: 416
Book: For Review*
Genre: Paranormal, Romance, Mystery, Urban-Fantasy, Action-Adventure, YA
Recommended Age: 12+
Contains: Death, Violence, Mild Swearing, Alcohol References
No Drug References
Author's Blog: Immortal City by Scott Speer
What price would you put on love?
Imagine a world where Guardian angels not only exist, but walk amongst us every day, treated as the ultimate A-listers.  Blogs are dedicated just to their movements, the latest fashion trends are dictated by what they wear.  They are still the Guardians, providing service, protecting people every day… for the right fee of course.
Jackson Godspeed is the hottest Angel in a city that is obsessed with these Immortals.  He’s about to become the youngest Guardian in history.  Everyone loves him.  Everyone except Maddy Montgomery.  She’s not interested in celebrities and the shallow world they inhabit.  Until Jackson takes refuge in the diner where Maddy works and a fierce, inexplicable connection pulls them together.  But as Maddy is reluctantly drawn into Jackson’s glamorous world, she’s exposed to more than just the paparazzi.  A serial killer is murdering one Angel at a time… and Jackson is his next victim.
Review:
You have the money? You have their Protection.
Los Angeles, Angel City, Immortal City. Angels walk among humans as Protectors, saving those rich enough to afford their protection.
Jackson Godspeed is the hottest, most talented and loved Angel in the city, just days away from achieving his dream of becoming a Guardian.
Maddy Montgomery seems to be the only one who isn't completely obsessed with the Angels. But after a chance meeting with Jacks in her uncle's diner, a bond strikes between them as they find themselves inexplicably drawn together.
But there's someone out there, brutally killing Angels. And Jacks is next...
All is not as it seems in the Immortal City.
I was feeling ill and couldn't bring myself to concentrate on one book, so I randomly started picking books up to read the first chapter. I did this many times. Until Immortal City. I started reading and then was like: "Oh my God! Angels walking around in Gucci protecting for money? Must keep reading!"  The rest of the book did not disappoint!
Maddy was really down-to-earth, modest and just an average human girl. I loved her stubbornness, how real and relatable she felt.  Also, the visions she got were awesome!  Horrible, but still awesome.  And her insecurities made her even more relatable and I liked it when she stuck up for herself; but I didn’t like that she stuck up for herself and then went back to being insecure…  Though Viv was pretty intimidating…  But really, Maddy rocked!
Jacks... Well, yum!  He was just so sweet, and I loved the hidden side of him, the more insecure and human side.  And... he was just so cute! And stubborn. And did I mention he was cute? Gallant, chivalrous, brave, dedicated, amazing, wonderful... I am so Angelstruck!
I really loved Maddy and Jacks' relationship.  Although it wasn't exactly love at first sight, it was pretty close.  But it worked.  Each had a reason to like the other when they met.  I could feel the chemistry.  Plus they were just so cute; I loved them together!
The other characters were great and just as 3D. A few of my favorites were the sweet and sincere Uncle Kevin, the Angel-addict and hilarious Gwen, the cop Sylvester, who was brilliant and had a secret of his own, and Jacks’ PA Darcy; a Blackberry-addict I found brilliant and really funny.
I loved this world!  I mean, Angels as celebs?  Protecting for money?  With awesome wings, really glamorous parties, Angel blogs and televised Saves… it was all so new to me!  And I really liked that the Angels weren’t all that angelic: they had flaws that made them feel human.  The sense of mystery about where they came from and the darker side of the Immortals was amazing!  And I loved the parody to the celeb world.  It was a really super and clever idea from Scott.  One that worked brilliantly and made me think about our own society...  Seriously: More please!
The writing was amazing: I loved the feel of it, the style, even though it was in third person, my least favorite.  Though ol’ third is growing on me!  I loved that it jumped from Maddy to Jacks, letting us see what was going on in both if their heads and feel what they felt. I also liked the time we spent in Officer Sylvester's head: what can I say, I love the crime novels! However, all the jumping could be a little confusing. But other than that; perfect!  The plot was awesome - and unexpected! I was expecting just a love story, but I got so much more!  I got a mystery too!   I love mysteries!  So it was ever so excellent to find out that there was a murder to solve! Ok, just read how sick and twisted that sounded, so ignore it please. But seriously, amazing.  Full of twists and turns with a non-stop pace, Immortal City was an addictive read I just zoomed through.
A hot, powerful Angel, a normal girl who couldn't care less, a series of brutal Angel murders and a forbidden love story, Immortal City was an awesome book that sucked me in from the word go.  A brilliant, brilliant debut set in a stunning world I can’t wait to dive back into!  Speer is an author to look out for!
I.  NEED.  BOOK.  TWO.  NOW!
Star Rating:

Read this book if you liked:
The Mortal Instruments by Cassandra Clare
Fallen by Lauren Kate
Vampire Academy by Richelle Mead
Challenges It's Taking Part In:
100 Books in a Year Reading Challenge 2012 (Hosted by Book Chick City)
2012 Debut Author Challenge (Hosted by The Story Siren)
Happy Reading
Megan
* This book was received from Scholastic in exchange for an honest review
Posted by TheBookAddictedGirl at 12:31

"Oh my God! Angels walking around in Gucci protecting for money? lol

o.m.g. I cant wait to read this! eep. Great review you made me more excited than i was before.

I was already looking forward to reading this, but your review has made me even more excited! It sounds like Immortal City has all the components of a brilliant book! Great review!

What an original concept!!! That is so clever. I am not angel books, but I would definitely pick this one up.

Just finished reading this book and I enjoyed it :)
New Follower
www.thephantomparagrapher.blogspot.com