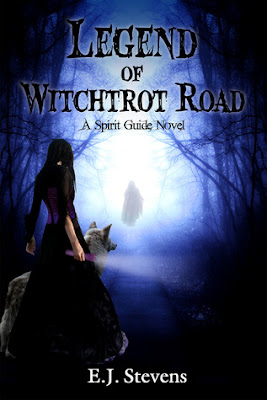 Series: Spirit Guide, Book Three
Publisher: Sacred Oaks Press
Format: Kindle
Published: 20th September 2011
Number of Pages: -
Book: For Review From Author*
Genre:  Ghost Story, Paranormal, Dark Romance, Urban Fantasy, Murder Mystery, YA
Recommended Age: 12+
Contains: Mild Violence and Ghosts
No Alcohol, Drug References
Available On: Amazon (Paperback, Kindle), Barnes & Noble (Paperback, Nook), Smashwords (eBook) and The Book Depository (Paperback)
Author's Blog: From The Shadows
Warning: May Contain Spoilers From Previous Books
Surviving agitated ghosts, irritated witches, angry werewolves, and the horrors of high school has never been so hard.
The night of Samhain may be behind them, but Yuki and her friends have only begun to face the challenges of their paranormal gifts. Tensions are rising--in the pack, at school, and within their tightly knit group of friends.
The tragic death of Wakefield High student Dylan Jacobs has emotions boiling over. The J-Team, Yuki's arch nemesis, have turned the entire football team against her. They claim that Yuki is a witch and blame her for the death of their fellow teammate. Will Yuki be able to solve the mystery of Dylan's death, and the legend of Witchtrot Road, before tempers flare and things turn violent?
Review:
Yuki survived Samhain, and everything should be fine (until next year, anyway.  Or until the witches she stole the amulet from find out she took it.  Whichever comes first).  But a jock has just died on Witchtrot Lane, centre of a witchy curse, and the J-Team – jocks and general jerks – think Yuki is the one who killed him.  She didn’t, obviously, but try telling that to the J-Team.  Plus a werewolf from Simon’s past has reappeared, and the rivalry between the two of them seems ready to explode.  But back to the J-Team… they are determined, scarily determined.  Yuki’s in real danger, until she can prove to the J-Team that’s she’s innocent.  Business as usual then: working on short time with a curse hanging over her head.  And don’t forget: “Never, ever travel on Witchtrot Road after dark…”
This is seriously one of my very favourite series ever.  It’s fun, cute, quirky, scary, funny and choc-a-block with ghosts.  The world is amazing – spirit guides, werewolves, dead-people-smelling-girls, witches.  The characters are wonderful and relatable.  The relationships feel 100% real and believable.  I was glued to the page from start to finish.  I just love everything about the Spirit Guide series – what am I going to do while I wait for Book Four?!
Yuki is honestly one of my favourite heroines.  She’s quirky, fun and totally cute.  I love her!  Plus, she’s completely insane.  Or, as my aunt would say, “special in the head”.  Which is just a nice, cute way of saying mad.  Yuki’s just so funny and witty and generally awesome!  I mean, she made little rice balls people, out of rice pudding, trail mix, fruit pieces and toothpicks… and ATE THEM!  God, that made me laugh.  She’s just absolutely, insanely wonderful – I love her snarky…ness.  And the really wonderful, wacky ideas came out of that special head.
Calvin Miller, alpha wolf and Yuki’s gorgeous boyfriend.  He’s perfect: can I have one like him?  Though he takes his alpha responsibilities seriously, he also had a bit of a wild side.  (Swoon.)  And he’s always looking after Yuki.  He is, truly, as Yuki said, “made of awesome”.  Cal’s just way too cute, and really rocking that alpha thing.
Cal and Yuki were, once again, the cutest EVER.  I totally felt the chemistry, and the love and the general adorableness.  They just complete each other.  Cal could practically read Yuki’s mind: he knew exactly how to make her feel better.  They were so cute, and the chemistry is totally believable.
And Emma, the best friend ever, who is sweet, funny and addicted to organisation.  And, again, knew exactly how to make Yuki feel better, what Yuki needed.  I love her!  But something strange was goin’ on with Emma in this one…  She wasn’t “On The Drugs”, but what the hey was up with her?
Simon was just brilliant!  I LOVE his guy!  He’s absolutely hilarious, totally vain and completely bonkers.  Now Cal’s second in command: Simon would do anything for his alpha.  And he respects Cal (‘though Cal’s probably the only one Simon does respect!).  Always flirting, he’s constantly funny with an ironic edge.  He’s ace and wonderful and the best.
A newcomer in the series, Gabriel, Meredith’s brother, Simon’s true love who died because of him.  Gabriel hated Simon, blaming him for Meredith’s death (this is part of a whole backstory thing, one that no one will get unless they’ve read the books).  Gabriel was bad tempered.  Therefore Yuki nicknamed him “The Brat”, and let me just tell ya, the nickname suited him.  He was sulky and childish.  Although, he was kinda funny – but shh!  Don’t tell him that!
The plot was really fast and super twisty, with an ending I definitely did not see coming – just how I like ‘em.  I was scared, amused, confused and seriously wowed by the (another Yuki word) awesomeness.  I love this series!  I haven’t come across anything even close to it.  No one does the hilarious to the scary like E.J.  She rocks!  As Yuki would say.
Now: BOOK FOUR PLEASE!  I mean, the ending was even worse than the others.  Way worse. Not suspense-worse, just worse-worse.  And if I don’t find out what happens next, I’m gonna end up Loco Lycans.  Seriously.  Plus, how will I be able to live without Yuki and the gang?!  I almost lost it when I went a day without the books.  So how, how, how will I manage without them?
Finally, to sum the story up in one sentence: Sleuthing with a side of ghosts – love it!
Star Rating:
4½ Out of 5

Read this book if you liked:
Spirit Guide Series by E.J. Stevens
Paranormalcy by Kiersten White
Bloodlines by Richelle Mead
Challenges It's Taking Part In:
100 Books in a Year Reading Challenge 2011 (Hosted by Book Chick City)
2011 eBook Challenge (Hosted by The Ladybug Reads)
Megan
* This book was received from the author in exchange for an honest review
Happy Reading
The Spirit Guide Series
Posted by TheBookAddictedGirl at 06:54

I haven't heard of this series before but it definitely sounds like one I would like. I will definitely look out for it.

Oh loving the sound of this! Great indepth review too!


I also have a book review and weekend blog hop right now too! http://wordsinsync.blogspot.com/2011/10/halloween-book-review-voice-of-blood-by.html

Love to see you there. Shah.X