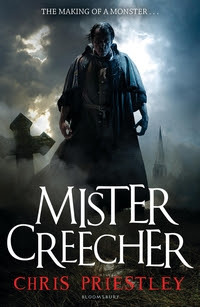 Publisher: Bloomsbury
Format: Paperback
Number of Pages: 416
Book: For Review*
Genre: Horror, Historical, Science-Fiction, Thriller, Suspense, Action-Adventure, YA
Recommended Age: 12+
Contains: Violence, Death, Mild Swearing, Drug and Opium References
No Alcohol References
Author's Site: Chris Priestley
Author's Blog: Chris Priestley
Keep an eye out for the awesome guest post Chris has written for us as part of his blog tour!  It'll go up tomorrow, and there's a giveaway involved!
Can a monster and a boy ever really be friends?
1818.  London.
Billy is a street urchin, pickpocket and petty thief.
Mr Creecher is a monstrous giant of a man who terrifies all he meets.  Their relationship begins as pure convenience.
But a bond swiftly develops between these two misfits as their bloody journey takes them ever northwards on the trail of their target… Victor Frankenstein. 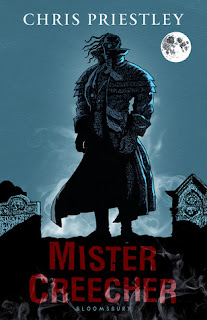 Review:
Billy is a thief.  Mister Creecher is an outsider, a freakish giant with a monstrous face, who while on the trail of mysterious Frankenstein, saves Billy from death.  To begin with, their relationship is pure convenience.  Creecher needs Billy to follow Frankenstein.  Billy needs Creecher for protection from other thieves.  But soon a bond forms between the two, as they realise they may have more in common than they first thought.
But as they follow Frankenstein, can their friendship last?  Or will it end up as bloody as their journey?
I read and loved Priestley’s The Dead of Winter, and I love Frankenstein so I of course had to me hooked from the start. A story about friendship in the unlikeliest places, it was bothget my hands on this one!  And it did not disappoint!  Creepy, suspenseful and thrilling, it had  beautiful and horrible.  I can’t wait for Priestley’s next book!
15-year-old Billy was a boy who had seen a lot, been through more and lost more still.  He had the feel of a street child – one from Dickensian novels.  He was sneaky, brilliant at observation, with the occasional snarkiness and was just a really resourceful and smart-thinking boy.  But he had this resentment in him: he was withdrawn, cut off because of everything that had happened to him.  And he felt really real to me, even if I wanted to yell at him at times!
Mister Creecher was a very complicated and odd character, one I did feel sorry for.  He knew how his looks made others think of him, and was sure he could never by happy. He was strangely vulnerable, sweet hearted, and desperate for love.  Yet he wasn’t afraid to kill.  He may not have been wholly human, but he had desires and longings, just liked humans.  Was he bad?  Good?  I think he was both.
And I loved Billy and Creecher’s relationship, how it changed.  It slowly shifted and I just loved how Priestley did this.  The friendship that blossomed felt natural to me.  Creecher was the only true friend Billy had ever had and vice versa.  Although everything changed again, they truly were friends.
I adore Chris Priestley’s writing: oddly beautiful, lyrical, creepy and utterly addictive.  He doesn’t shy from the gore, the suspense.  I was completely absorbed in the story, under its spell.  It was shocking, creepy, beautiful, bloody and spooky.  The plot was equally amazing, and so unexpected.  I really had no idea where the story was going.  And the end… God.  I never saw it coming!
The setting was just amazing – London, 1818.  It was so vivid, so lifelike – it jumped off the page and into my head.  Priestley has a real talent for creating gritty and vivid settings that make me feel like I’ve gone back in time.  Or they’re so real it feels like I’ve picked up a Dickens novel.  And he truly made London back then creepy, gothic and spooky: I loved it!
I loved how the story tied in with Frankenstein and another novel from around that time, one I didn’t realise was more than just an influence until I looked the book picture up and stumbled across an award.  Until right toward the end, I didn’t even know how much Book 2 tied in with the story.  I almost felt like smiling as it was revealed.  In a strange, horrible and rather shocking way, it was perfect.  It was so unexpected.  Which made that final twist all the more brilliant.
Creecher kills and Billy steals.  Both should be Bad.  Both should be Not Liked.  But… I couldn’t hate them.  Creecher was looked upon in horror, so he became what was thought of him.  Billy stole because he had to, to survive.  Creecher loved to read and just didn’t want to be alone.  Billy wanted a family, a friend.  Although they should be bad, I couldn’t hate them.  They were human.  While both had their downfalls, they also had redeeming qualities.  Good is in all, even ‘monsters’ and thieves.  They made me question everything.
A book of contradictions, friendship, betrayal, murder, science and the search of happiness, Mister Creecher was one heck of a book, a gothic horror story, full of twists and chills, with the most amazing setting and beautiful writing.  I could go on forever, so all I shall say is READ THIS!  You will not regret it.  It’s a horror story that makes you think, especially about one question: Nature Vs Nurture.  Perfect.
Star Rating:
4 Out of 5

Read this book if you liked:
The Dead of Winter by Chris Priestley
Frankenstein by Mary Shelley
The Hunger Games by Suzanne Collins
Wolf Blood by N.M. Browne
Challenges It's Taking Part In:

Ooh this does sound good. I got one of my guest reviewers to read it for me, but beginning to wish that I hadn't!

I loved this book, but then again I love all of Chris Preistley's books! Great review Megan! :D