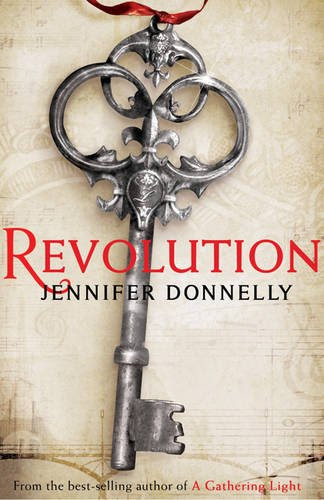 Revolution
By: Jennifer Donnelly
Published: 4th October 2010
Found: On Natalie (Mindful Musings)'s Blog
Synopsis From Goodreads:
BROOKLYN: Andi Alpers is on the edge. She’s angry at her father for leaving, angry at her mother for not being able to cope, and heartbroken by the loss of her younger brother, Truman. Rage and grief are destroying her. And she’s about to be expelled from Brooklyn Heights’ most prestigious private school when her father intervenes. Now Andi must accompany him to Paris for winter break.
PARIS: Alexandrine Paradis lived over two centuries ago. She dreamed of making her mark on the Paris stage, but a fateful encounter with a doomed prince of France cast her in a tragic role she didn’t want—and couldn’t escape.
Two girls, two centuries apart. One never knowing the other. But when Andi finds Alexandrine’s diary, she recognizes something in her words and is moved to the point of obsession. There’s comfort and distraction for Andi in the journal’s antique pages—until, on a midnight journey through the catacombs of Paris, Alexandrine’s words transcend paper and time, and the past becomes suddenly, terrifyingly present.
Jennifer Donnelly, author of the award-winning novel A Northern Light, artfully weaves two girls’ stories into one unforgettable account of life, loss, and enduring love. Revolution spans centuries and vividly depicts the eternal struggles of the human heart.
This looks brilliant, and the idea behind it all sounds genius.  And lovin' the cover!  The key on the red ribbon: simple and gorgeous!

Tell Me a Secret
By: Holly Cupala
Published: 22nd June 2010
Found: On Aylee (Recovering Potter Addict)'s Blog
Synopsis From Goodreads:
In the five years since her bad-girl sister Xanda’s death, Miranda Mathison has wondered about the secret her sister took to the grave, and what really happened the night she died. Now, just as Miranda is on the cusp of her dreams—a best friend to unlock her sister’s world, a ticket to art school, and a boyfriend to fly her away from it all—Miranda has a secret all her own.
Then two lines on a pregnancy test confirm her worst fears. Stripped of her former life, Miranda must make a choice with tremendous consequences and finally face her sister’s demons and her own.
In this powerful debut novel, stunning new talent Holly Cupala illuminates the dark struggle of a girl who must let go of her past to find a way into her own future.
This sounds brilliant as well, and very emotional-a-read.  "Dark Struggle", well, I seem to be liking those at the moment! 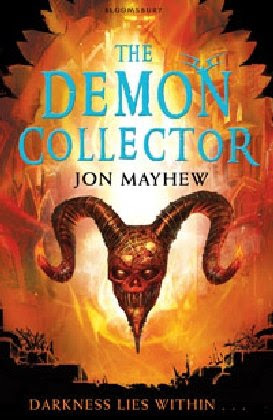 The Demon Collector
By: Jon Mayhew
Published: 7th March 2011
Found: On Sammee (I Want To Read That)'s Blog
Synopsis From Amazon:
In the time before time, Satan ruled the molten Earth, worshipped by his demons. One demon turned against him and imprisoned Satan deep in the bowels of the earth. When Satan escaped, as punishment, the demon's heart was torn from his chest and his body hidden deep in the polar ice. Only Satan knows where he lies. The heart is hidden elsewhere. If the two are brought together, the demon will be reborn and darkness will reign. Edgy Taylor sees demons when nobody else can. Edgy thinks he is insane and expects to be carried off any minute. He is a prime collector, wandering the streets of London collecting dog muck for the tannery. The only thing Edgy is good at is setting and solving riddles, and evading his brutal and abusive master. One night, when his master seems genuinely intent on killing Edgy, Professor Envry Janus intervenes. Envry takes him to the Royal Society of Daemonology where Edgy will now live. It is here, though, that Edgy discovers chance had nothing to do with their meeting, and that he holds the key to a deadly demon prophecy.
All I can say is wow, this looks a-maz-ing!  Demons, Satan, Daemonology all add up to something I'd love to read!  And the title is brilliantly creepy: gotta love it! 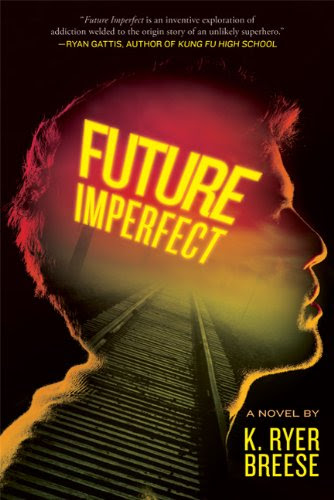 Future Imperfect
By: K. Ryer Breese
Published: 26th April 2011
Found: On Kirsty (The Overflowing Library)'s Blog
Synopsis From Goodreads:
Ade Patience can see the future and it's destroying his life. When the seventeen-year-old Mantlo High School student knocks himself unconscious, he can see days and decades into his own future. Ade's the best of Denver's "divination" underground and eager to join the heralded Mantlo Diviners, a group of similarly enabled teens. Yet, unlike the Diviners, Ade Patience doesn't see the future out of curiosity or good will; Ade gives himself concussions because he's addicted to the high, the Buzz, he gets when he breaks the laws of physics. And while there have been visions he's wanted to change, Ade knows the Rule: You can't change the future, no matter how hard you try.
His memory is failing, his grades are in a death spiral, and both Ade's best friend and his shrink are begging him to stop before he kills himself. Ade knows he needs to straighten-out. Luckily, the stunning Vauxhall Rodolfo has just transferred to Mantlo and, as Ade has seen her in a vision two years previously, they're going to fall in love. It's just the motivation Ade needs to kick his habit. Only things are a bit more complicated. Vauxhall has an addiction of her own, and, after a a vision in which he sees Vauxhall's close friend, Jimmy, drown while he looks on seemingly too wasted to move, Ade realizes that he must break the one rule he's been told he can't.

The pair must overcome their addictions and embrace their love for each other in order to do the impossible: change the future.
Whoa,  once more a-maz-ing.  I love psychics, and I love the idea of love and the darker side with drugs.  Sounds so good, and the cover is incredible, with the long, barren railway track...
The Prophecy of the Sisters
Series: The Prophecy of the Sisters, Book One
By: Michelle Zink
Published: 1st August 2009
Found: On Small Review's Blog 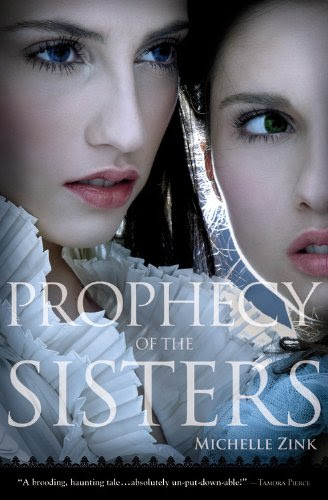 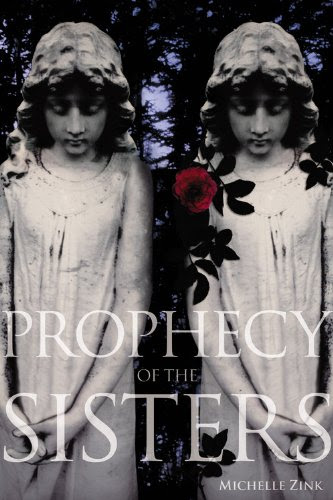 Paperback     |     Hardcover
Synopsis From Goodreads:
In Michelle Zink's debut novel, orphaned twin sister Lia and Alice Milthorpe are yoked together in an ancient prophecy that makes them enemies and could destroy them both. If Lia can break this familial curse, she can not only save her relationship with her beloved boyfriend; she can finally resolve the mystery behind her parents' death. A teen author to watch.
This looks like an brilliant book, and family curses are always interesting to read about!  I'm not sure which of the two covers I prefer... I'm leaning towards the paperback... it's prettier, more colourful and I just like it.  Although the hardcover is creepier, and probably fits in with the whole curse theme better... Hmm, what do you think? 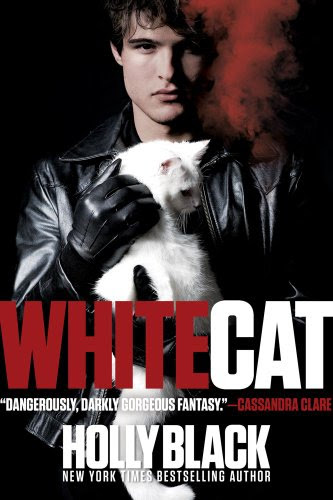 White Cat
Series: Curse Workers, Book One
By: Holly Black
Published: 8th February 2011
Found: On Lily Bear (Book Lungs)'s Blog
Synopsis From Goodreads:
Cassel comes from a family of curse workers — people who have the power to change your emotions, your memories, your luck, by the slightest touch of their hands. And since curse work is illegal, they're all mobsters, or con artists. Except for Cassel. He hasn't got the magic touch, so he's an outsider, the straight kid in a crooked family. You just have to ignore one small detail — he killed his best friend, Lila, three years ago.
Ever since, Cassel has carefully built up a façade of normalcy, blending into the crowd. But his façade starts crumbling when he starts sleepwalking, propelled into the night by terrifying dreams about a white cat that wants to tell him something. He's noticing other disturbing things, too, including the strange behavior of his two brothers. They are keeping secrets from him, caught up in a mysterious plot. As Cassel begins to suspect he's part of a huge con game, he also wonders what really happened to Lila. Could she still be alive? To find that out, Cassel will have to out-con the conmen.
Holly Black has created a gripping tale of mobsters and dark magic where a single touch can bring love — or death — and your dreams might be more real than your memories.
I've heard amazing things about this book, and it does look absolutely sensational.  I love the sound of curse workers, gloves, and a white cat.  I have to get the one, I think!
So, that's my Wishlist this week.
What are you Wishing for?
Posted by TheBookAddictedGirl at 13:09

Email ThisBlogThis!Share to TwitterShare to FacebookShare to Pinterest
Labels: Book Chick City, Extras, Meme, On My Wishlist, On My Wishlist #6, Wishlist

I adore that cover for Revolution - it really makes me want to buy the UK copy!! :)