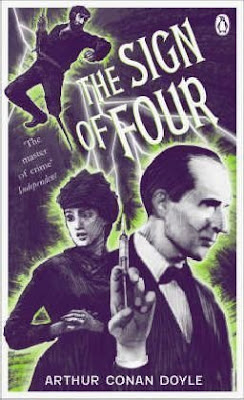 Series: Sherlock Holmes, Book Two
Publisher: Penguin
Format: Paperback
Published: This Addition: 2007
First Published: 1890
Number of Pages: 154
Book: Bought
Genre: Murder Mystery, Classic
The Sign of Four means murder...
A dense yellow miasma swirls in the streets of London as Sherlock Holmes and Dr Watson accompany a beautiful young woman to a sinister assignation.
For Mary Morstan has received several large pearls – one a year for the last six years – and now a mystery letter telling her she is a wronged woman.  If she should seek justice she is to meet her unknown benefactor, bringing with her two companions.
But, unbeknownst to them all, others stalk London’s fog-enshrouded streets: a one legged ruffian with revenge on his mind – and his companion, who places no value on human life...
Review:
Well, I loved A Study of Scarlet, and The Sign of Four was just as good – better actually!
The book started with Holmes injecting cocaine, and a worried – a slightly distressed – Watson asking him why he does it.  The answer: Holmes is bored.  Of course.  Bet you didn’t know that straight-laced Holmes was a drug addict!
The mystery begins when a young lady called Mary Morstan arrives, revealing she has a mysterious benefactor who’s been sending her pearls for six years.  Now whoever-they-are is telling her she’s a “wronged woman”, only she has no idea how she’s been “wronged”.  When Holmes and Watson accompany her to the rendezvous spot, little do they know that they’re going to be swept into a mystery involving hidden treasure, murder, faraway lands, convicts, and foreign savages...
I’m going to start off by saying I love Holmes!  His way of dealing with boredom... well, unconventional, but it made me laugh.  So did the fact that Watson’s arm injury from the war has suddenly and miraculously transformed into a leg injury.  How, I have no idea.
But other than that, this book was amazing.  Holmes was more human, I think, as well as being a deduction-extraordinaire, and at times made me laugh a little.  As I said in my review of the first book: Holmes is brilliant.   Unconventional, a drug addict, more than a little crazy, yes: but brilliant.  I loved hearing his process, and was just as amazed as Watson was when I heard Holmes describing the reasons he figured out certain parts of the mystery.
As for Watson, he’s still smart and level-headed, despite the surprise jump of his injury from his arm to his leg.  The story’s told from his point of view again, and I loved hearing everything from his way of thinking.
The deduction and murder was brilliant and addictive, as were Holmes and Watson’s friendship.  They are definitely one of the most dynamic duos out there – I’ve even seen some people describe their relationship as a bromance!
I loved everything: the writing, the characters, the mystery, the suspense and the budding romance for Watson...  Amazing.  I can’t wait to read the next in the series: can’t get enough of the deduction!
Star Rating:
4½ Out of 5

Great review! I love A Study in Scarlet. A friend recommended it and I became hooked! I'll definitely have to check this one out :)