Teaser Tuesday is a weekly meme hosted by MizB of Should Be Reading.

Here are the rules: 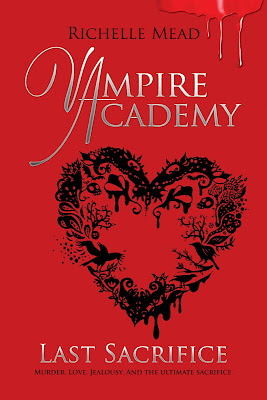 Technically, I've already finished the book my Teaser's from... but it had such great quotes!  So, my Teaser Tuesday this week is from Vampire Academy: Last Sacrifice by Richelle Mead.  Enjoy!
Chapter One, Page 1
I don't like cages.
Chapter One, Page 10
I'm not supposed to die this way.  I'm not supposed to see it coming.  My death is not some appointment penciled in on a calender.
Chapter Four, Page 53
"Oh Lord.  You're the one who's been doling out C4."
"You make it sound so easy," he said with a frown.  "That stuff's hard to get a hold of."
Chapter Four, Page 54
“Ah, my daughter,” he said. “Eighteen, and already you’ve been accused of murder, aided felons, and acquired a death count higher than most guardians will ever see.” He paused. “I couldn’t be prouder.”
Chapter Twenty-Nine, Page 466
What  I did... What I did was unforgivable."

'What I'd like to know is: who in the world are you?'
'I'm Rose Hathaway.'
I'm so, so, so sad that the series from Rose's POV is over.  Buut...  Bloodlines is out soon, so I don't have to leave the world just yet - thankfully.
Hope you liked the teasers, and my review of Last Sacrifice will be posted later today.  Anyone else have any teasers?

Chapter Eleven, Page 177
"Hey, enjoy where you're at, remember? Not where you can't go."
He reluctantly shut the book and dragged his eyes away from it. "How'd you get so wise?" he teased.
"I had a good teacher."
Chapter Twelve, Page 190
"Having your own, um, cave at eighteen is pretty cool." It would have been cooler still with electricity, Internet, and plumbing, but there was no need to bring that up.

Ah, loved this book.  And you can read my review: here.  If you haven't read this series, read it now.  And I mean right-this-second now.  It's worth it and definately will not let you down!
Posted by TheBookAddictedGirl at 07:37