Before I Die by Jenny Downham 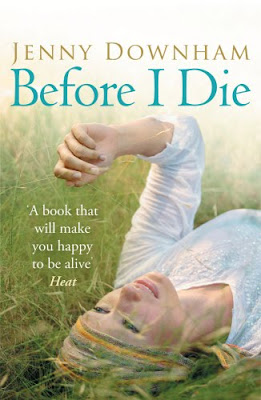 Email ThisBlogThis!Share to TwitterShare to FacebookShare to Pinterest
Labels: 5 Stars, Before I Die, Jenny Downham, Romance, True to Life Fiction, YA, YA-Adult Crossover

Wow, yet another awesome review! This book sounds really good, and I'm sure it will get the reader to think a lot, of death and of living your life while it lasts. I'm not sure One box of tissues would be enough for me if I would read this book, I cry so easily!

I read this book last year and it truly was a wonderful book.
I loved the part where she shoplifted and got caught... don't ask me why, but I found that hilarious. She was right, though- it wasn't like she'd have to worry about the consequences of it later in life.

I absolutely love this book! It's on my must read list. It really makes you think about the way you are and what you can change. I never fail to cry when I'm reading this one.