The Bunker Diary by Kevin Brooks 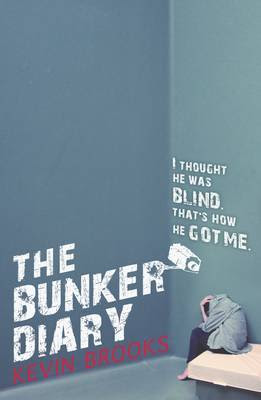 I can’t believe I fell for it.

It was still dark when I woke up this morning.  As soon as my eyes opened I knew where I was.
A low-ceilinged rectangular building made entirely of whitewashed concrete.  There are six little rooms along the main corridor.
There are no windows.  No doors.
The lift is the only way in or out.
What’s he going to do to me?
What am I going to do?

If I’m right, the lift will come down in five minutes.
It did.
Only this time it wasn’t empty…

Read this book if you liked:
Entangled by Cat Clarke
Before I Die by Jenny Downham
Saving Daisy by Phil Earle
Kill All Enemies by Melvin Burgess


Happy Reading
Megan
* This book was received from Penguin in exchange for an honest review
Posted by TheBookAddictedGirl at 00:30

This is a grim and dark book but is written in a fascinating way that develops in displaying Linus's mind throughout the book. Highly recommended for those that enjoy an open ending.

I really like and agree with your article in every aspect (except I liked Fred very much :D).
I Just finished the book and my hands are shaking. It's just such a moving, terrifying and shocking book. I never experienced something like that before. Truly unique

Well i cried at the jenny part

Wow, this is a great book. With the unforeseen ending. I don't know why everyone is complaining... I thought the book was well written with a great plot.

Possibly one of the most depressing books I've read in a while, but my god was it a page-turner. Finished the whole thing in one sitting.

I always turn to Vampire any time i want to. i become a Vampire because of how people treat me, this world is a wicked world and not fair to any body. at the snack of my finger things are made happened. am now a Powerful Man and no one step on me without an apology goes free. i turn to Human being also at any time i want to. and am one of the most dreaded Man in my country. i become a Vampire through the help of my friend who introduce me into a Vampire Kingdom by given me their email. if you want to become a Powerful Vampire kindly contact the Vampire Kingdom on their Email: Vampirelord7878@gmail.com