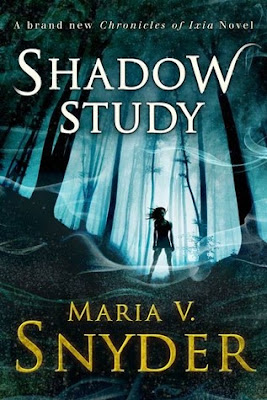 Blurb From Goodreads:
Once, only her own life hung in the balance…
When Yelena was a poison taster, her life was simpler. She survived to become a vital part of the balance of power between rival countries Ixia and Sitia.
Now she uses her magic to keep the peace in both lands—and protect her relationship with Valek.
Suddenly, though, dissent is rising. And Valek’s job—and his life—are in danger.
As Yelena tries to uncover her enemies, she faces a new challenge: her magic is blocked.  And now she must find a way to keep not only herself but all that she holds dear alive.

Review:
“Dead air surrounded me.
My magic was gone…”
When you miss your days as a poison tester, you know your life is crazy.
Yelena Zaltana, former poison tester for the Commander of Ixia, now Liason between Ixia and Sitia and powerful magician, is just looking forward to some quality time with her heart mate, Valek, when she is shot by a poisoned arrow.  Thinking she expelled all the poison before it had a chance to take effect, she leaves the hunt for her assassin to Valek.
But she didn't get it all out.  And now her magic is gone, leaving her defenceless against a magical enemy she thought she'd defeated.
Meanwhile, Valek attempts to find Yelena's attempted-assassin, take down a smuggling ring (with the help of Janco and Ari) and also deal with a newcomer who is vying for his job.
Can Yelena save her own life, let alone the ones she loves, when she is deprived of the very thing that makes her strongest?
“Run and hide?  That was so not my style…”
When I found out Yelena's story would continue in a brand new trilogy, I freaked out; I was just so, so excited.  In fact, I did many a happy dance.  But when I got my hands on Shadow Study, I found myself a bit nervous, since I haven't actually read the Glass series yet.  I shouldn’t have worried: it didn't take long for me to figure out what had happened – and I'm sure I'll reread Shadow Study after I read the Glass series, so it doesn't matter much! 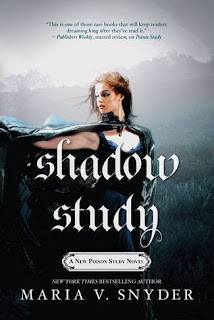 But anyway: I was also worried Shadow Study wouldn't live up to the original series.  But I was, of course, wrong.  From the very start, it was all action and just as magical as ever – and we even had Valek and Janco chapters, two of my other fave Study characters!  Can I hear a HELL YEAH!
Yelena has grown up so much in the time between Fire Study and Shadow Study.  Not surprising, given the time that has passed, but she's matured a lot.  I love her – how badass and brave she is, even without her magic.  We got to see more of the human Yelena, the one who was cunning, Valek's student and who needed her friends – I liked that a lot.
Valek.  I loved learning more about Valek's past, about how he became Valek.  About why he makes animals form the black stone with silver specks.  About why he's so rational.   About how and why he became an assassin.  About how he was told to not feel, how emotions were weakness, but he's embraced them anyway because of his good heart, how he is so so caring.  It has made me love him even more – something I thought impossible.
Janco: oh how I love him!  He's my favourite soldier ever, my favourite comedic release in this suspenseful series.  He's also man after my own heart – not a morning person.  I get it, Janco.  "Bright sunlight, chirping birds and those obnoxious morning people" make my stomach churn too.  Seriously though, I am so in love with this bonkers, hilarious, brave soldier – as-much-as-I-love-Valek kind of love.
Now for our supporting cast.  First up Ari, who sadly we didn’t see as much of, but he was so brilliant when we did!  And Leif has become such a protective big brother!  He killed me at time – the boy has serious snark!  And little Fisk!  Not so little now – and such an entrepreneur!   Oh, and Reema killed me – the lines that kid came out with were amazing!  And then there’s Onora, who just intrigues me – I can’t wait to learn more about her, and I see a future love connection with my favourite little Janco (though does anyone else totally want Janco and Ari to be a couple?  Is that just me?  Just think – they could be Jaari or Arco or Janri: too cute!). 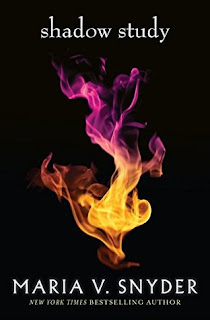 I must say, I loved this triple but linked storyline.  The way we followed Yelena, Valek and Janco made the action and suspense just nonstop and full on.  Of course, I occasionally wished it was easier to skip ahead on my Kindle – sometimes I just wanted to continue with the storyline I read in that chapter, because they were always left on cliffhangers!  Noo!  But seriously: loved it to pieces.  And that ending... Oh. My. Gods.  I need the next book – like right now.  Or, even better, yesterday!
And the writing: OH MY GODS, I love split POVs.  So so much.  I mean, we got to read daring quests from the perspectives of the lovely and kickass Yelena, the gorgeous and badass Valek and  the hilarious and brilliant Janco.  It was just so much awesome to fit into one book – and I loved it so much!  I've always loved Yelena, but it was so great to get to know Valek and Janco better!   And Maria is always so good at writing brilliant action scenes, scenes of comic relief and sparkling dialogue – and Shadow Study had all of these in spades!
I've said so many times and I'll say it again: I love this world!  I love Ixia and I love Sitia and I love the magic and the politics and the spying and the mad adventures.  I want to move here – live in Sitia with the Zaltanas, or live in Ixia and be one of Valek's spies.  I just love Maria's world building so freaking much and I can't get enough of this brilliant world she's created.
Damn, I love this world, this series and these characters.  It feels so much like home – like one of my favourite places to be – and I'm so glad I get to spend even more time here.  Shadow Study managed to exceed every single one of my expectations and left me shaking for so much more.  I just... God, I loved it so much!  Maria V. Snyder is always amazing, always a true artist, but Shadow Study exceeds all the others in the Study series so far.  Night Study can't come quickly enough!

Read this book if you liked:
Study Series by Maria V. Snyder
Throne of Glass and A Court Of Thorns And Roses by Sarah J. Maas
Grisha Trilogy by Leigh Bardugo


** Quotes used are from a proof copy and may have been changed in the finished book
Posted by TheBookAddictedGirl at 00:30 1 comment:

A Court Of Thorns And Roses by Sarah J. Maas 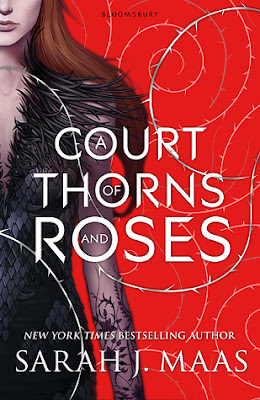 Blurb From Goodreads:
The breathtaking start to a seductive high-fantasy from New York Times bestselling author of Throne of Glass series.
Feyre’s survival rests upon her ability to hunt and kill – the forest where she lives is a cold, bleak place in the long winter months. So when she spots a deer in the forest being pursued by a wolf, she cannot resist fighting it for the flesh. But to do so, she must kill the predator and killing something so precious comes at a price.
Dragged to a magical kingdom for the murder of a faerie, Feyre discovers that her captor, his face obscured by a jewelled mask, is hiding far more than his piercing green eyes would suggest. Feyre’s presence at the court is closely guarded, and as she begins to learn why, her feelings for him turn from hostility to passion and the faerie lands become an even more dangerous place. Feyre must fight to break an ancient curse, or she will lose him forever.

Read this book if you liked:
Throne of Glass by Sarah J. Maas
Grisha Trilogy by Leigh Bardugo
Gracling by Kristin Cashore
The Sin Eater's Daughter by Melinda Salisbury


** Quotes used are from a proof copy and may have been changed in the finished book
Posted by TheBookAddictedGirl at 08:34 2 comments: