The Exact Opposite Of Okay by Laura Steven 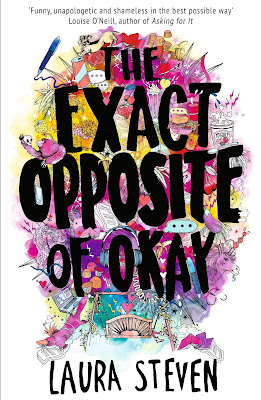 
Izzy O’Neill
Impoverished Orphan
Aspiring comedian
Slut extraordinaire – apparently...
Izzy never expected to be eighteen and internationally reviled.  But when photos involving her, a politician’s son and a garden bench emerge, the trolls set out to take her apart.
Armed with best friend Ajita and a metric ton of nachos, she must figure out who’s behind the vicious website – while keeping her sanity intact.
Izzy is about to find out that the way the world treats girls is not okay.
It’s the Exact Opposite of Okay.
A novel for anyone who’s ever called themselves a feminist... and anyone who hasn’t.


Review:
Anyone who knows me is aware that I am a total fantasy addict.  It is insanely rare to find me reading anything set in the real world that doesn’t include magic, demons or dragons.
But when Egmont sent me The Exact Opposite Of Okay, I was just instantly intrigued.  The cover is adorable and the synopsis just appealed to the feminist in me.  So, of course, I decided to read the first chapter to check out the story.  And then, suddenly, I was eighty pages in, had forgotten to have a shower and was absolutely hooked!
Because Izzy O’Neill is just a legend.
She might be an orphan and poor as dirt, but she’s an aspiring comedic legend and prolific blog writer.
Life is pretty okay for Izzy – well, sure, BFF No 1 has developed a weird crush on her and BFF No 2 seems to be interested in the new Victorian Secret model, plus Izzy is too broke to go to college.  But other than that!
Until The Night.  The one where Izzy sleeps with two guys at a party – one being the son of a super racist politician...  And pictures are possibly leaked...   And, yeah, things kind of escalate rapidly from there.
But with the help of BFF No 2, Ajita, her grandmother Betty and a lot of nachos, Izzy is determined to find whoever is besmirching her good (ish) name and let the world know that what they’re doing right now?  IT IS NOT OKAY.
Seriously, guys.  This book.  It is a feminist manifesto told in the most fun, hilarious, addictive way.  It is empowering and angering and touching and did I mention hilarious?  It’s a book every teenager should read, girl or boy.  Because the things that happen to Izzy in this book?  They aren’t okay – at all – and they happen to so many people, especially young and vulnerable girls.  And it just – it made me so angry and upset for Izzy, but somehow this wasn’t an angry book.  It was a book about dealing with revenge porn and bullying and violation with humour and nachos and pride and panache.  And I just – I love it.  I love this book so much. 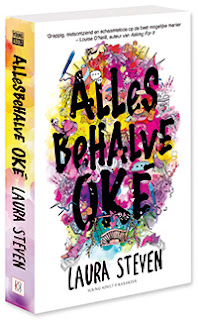 Largely because of Izzy.  Izzy is amazing.  She is such a brilliant character – absolutely comfortable with herself and her sexuality, charismatic and hilarious and brilliantly odd.  And then she is absolutely betrayed and violated by someone, bullied and shamed and teased and judged.  And she’s broken and hurting, but she deals with it so amazingly.  She does everything to remain upbeat, even when she’s dying inside and hiding her pain with humour.  Everything she went through, all the pain and humiliation she felt, it honestly made me cry more than once.  And yet Izzy never failed to make me smile – she’s the kind of person I would just love to be around.  And, yes, she makes mistakes and sometimes seems flippant or uncaring, but I just loved that about her.  I also loved that she’s honestly one of the strongest characters ever, to deal with all of this and survive.  I don’t know what I’d do in her place, I really don’t.
Also Ajita is the best friend everyone should have – that girl’s sass and snark is legendary and I bow before the Queen.  And Betty, Izzy’s grandma?  Literally amazing.  The coolest grandmother in the history of ever.  I love her.  Oh, as for Meg – Izzy’s classmate who happens to be a wheelchair user... for some reason, I really loved her.  I wonder why...?  Hmm...  And if you’re thinking it’s because I’m also called Meg and a wheelchair user, you are only partly right.  Mostly it’s because she’s an absolute sweetheart.
But seriously now.  This book might be so very funny, but it deals with so many sensitive topics with a truly effortless grace.  Revenge porn, slut-shaming, misogyny, classism, racism, sexism... so many topics that can so easily be too heavy, but they were all handled with humour that lightened them but also didn’t take away from their impact.  We live in a world where patriarchal dicks are constantly trying to put restraints on women’s behaviour.  As Izzy says, it’s a lose-lose situation.  If women enjoy sex, they’re a slut (a man, however, would just be a player, a legend).  If women don’t want to have sex or refuse to send nude images, they’re frigid, a tease.  Society is still so messed up, even in this day and age, and the double standards and stupid judgmental idiotic opinions are just so infuriating.
The Exact Opposite Of Okay deals with this anger and hopelessness and frustration beautiful.  It was totally empowering and such a brilliant feminist manifesto that everyone should read.  It was also moving and addictive and fun.
I honestly just loved this book.  If you haven’t gathered.  My only complaints are that although the book is set in America, sometimes Laura’s Britishness definitely showed.  And that maybe Izzy referred to herself as a ‘poor orphan’ a little too often.  Other than that, I just adored this book and everything about it.  We need more books like this in the world because only when people stop accepting and perpetuating the same idiotic prejudices and sexism will society be equal and able to move forwards.
So read The Exact Opposite Of Okay.  Read it now.  And then let’s all go for some nachos, because I’ve been craving them ever since I started this book, and teach the world that Bitches do indeed Bite Back.

Read this book if you liked:
Simon Vs The Homo Sapiens Agenda by Becky Albertalli
Am I Normal Yet? by Holly Bourne
Asking For It by Louise O’Neil


Happy Reading
Megan
* This book was received from Egmont in exchange for an honest review
Posted by TheBookAddictedGirl at 04:55 1 comment: