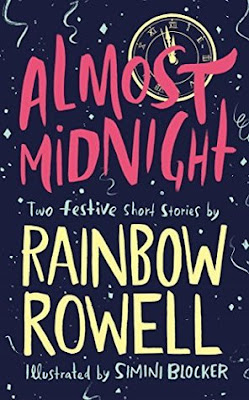 
Blurb From Goodreads:
Midnights is the story of Noel and Mags, who meet at the same New Year's Eve party every year and fall a little more in love each time . . .
Kindred Spirits is about Elena, who decides to queue to see the new Star Wars movie and meets Gabe, a fellow fan.
Midnights was previously published as part of the My True Love Gave to Me anthology, edited by Stephanie Perkins and Kindred Spirits was previously published as a World Book Day title.


Review:
Mags and Noel met at a New Year’s Eve party – Noel later claims she saved his life that night.  All Mags did was tell him the pesto had nuts in.  As the New Year’s Eve parties come and go with the passing years, their friendship changes yet stay the same...
Elena thought the queue for The Force Awakens’ opening night would be longer.  Instead it’s just her, a kid her age with his nose stuck in a book and a blonde bearded guy who’s been to like every Star Wars queue ever.  So it’s safe to say it isn’t quite the party Elena was hoping for – but she’s here for Star Wars, her one true love, and she will stick with this queue!  Besides, a lot can happen when you camp outside a movie theatre for a week...
When I got sent Almost Midnight (and a totally adorable and delicious box of goodies) from MyKindaBooks in preparation for the Almost Midnight readalong, it was almost impossibly not to dive straight into this gorgeous little book!  I adored both of the short stories in this little anthology and the illustrations just made me fall even more in love!  Rainbow is one of the few contemporary authors I always read – I’m such a fantasy girl that I almost never read contemps – but I always make an exception for Rainbow!  And she so didn’t disappoint with these adorable, fun and hilarious stories! 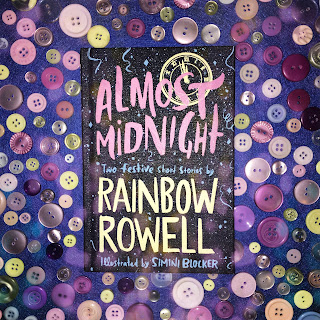 I loved Midnights so much!  Mags and Noel were just too precious and adorable for life!  Mags was so very much like me – I really related to her!  And Noel was just hilarious and so very sweet – a big, beautiful, brilliant weirdo who wore a three-piece white suit to a New Year’s Eve party.  Only Noel.  Only Noel.
Kindred Spirits is a story that so appeals to the crazy fangirl in me!  I love Star Wars (though definitely not as much as Elena – she’s a true, hardcore fan of Star Wars!) so I really enjoyed all the references and the marvellous geekiness of this story!  Plus Elena was literally the cutest thing ever, Gabe was really sweet and Troy was so funny.  Also the ending was just hilarious – I laughed so much!  It seems like just the kind of thing I’d do.
Rainbow’s writing was, as ever, beautiful and compelling and brilliant.  It sucked me straight in and made me care so much about these characters in a really short space of time – something that’s often really hard in novellas that aren’t linked to a favourite series of mine (which is generally the type of short story I read).  And as for those illustrations?  They just added an extra level of beauty and brilliance to this story and make me wish every book could be illustrated by Simini Blocker!
If you’re a hardcore Rainbow Fangirl or just a lover of quick and utterly cute stories, you have to check Almost Midnight out!  You won’t regret it – promise!  You especially must pick it out if you love cute dorks in white suits, Star Wars, coffee or want to get into the festive spirit!  I know I’m going to be rereading Midnights at least before New Years – I love it so much!  Rainbow, you’ve done it again!  You’ve made this fantasy-obsessed girl oh so very very happy to read about reality – and that it not an easy thing to do!

Read this book if you liked:
Fangirl by Rainbow Rowell
The It Girl by Katy Birchall
Let It Snow Anthology


Happy Reading
Megan
* This book was received from Macmillan in exchange for an honest review
Posted by TheBookAddictedGirl at 00:00 1 comment: