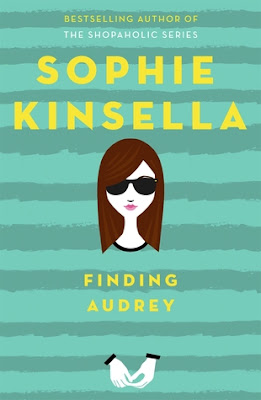 Audrey can’t leave the house.  She can’t even take off her dark glasses inside the house – a house that her totally chaotic but well-meaning family fill to the brim with their (pig) personalities and (loud) voices.
Then her brother’s friend Linus stumbles into her life.  With his friendly orange-slice smile and his funny notes, he starts to entice Audrey out again – well, Starbucks is a start.  And with Linus at her side, Audrey suddenly feels she can do things she’d thought were too scary.
Even when it’s two steps forward and one step back, suddenly finding her way back to the real world seems achievable.
Be prepared to laugh, dram and hope with Audrey as she learns that even when you think you have lost yourself, love can still find you…

Review:
Ever since the... thing happened, Audrey Turner has worn her dark glasses, stayed inside and only had contact with her family and her psychiatrist, Dr Sarah.  You see, Audrey has Social Anxiety Disorder, General Anxiety Disorder and Depressive Episodes.  So, yeah.  Things most people wouldn't blink an eye at have Audrey running to hide. 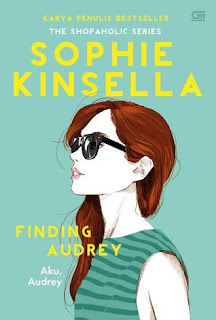 And then her older brother, Frank's friend, Linus, comes into her house.  To start with, Audrey freaks - after all, the house seems small enough with her loud, boisterous family; add in a stranger and it becomes almost overwhelming.
But Linus... Linus is nice.  When he smiles, it looks like an orange slice and he calls her Rhubarb and talks to her in a soft, friendly voice.  He makes her feel brave, makes her able to do things that terrify her.
But when the world itself terrifies you so much you feel allergic it, can you even find your way again?
I'm really not good when it comes to reading contemp books.  But when my mother handed me the first Shopaholic book years ago, I fell in love.  So when I found out that Sophie Kinsella was branching out into YA, I cheered.  I was so excited for Finding Audrey and did a little happy dance when it landed on my doormat.  From that first, bonkers chapter, I fell in love – with Audrey, with Sophie all over again, and mostly with Audrey's nutty family!  Just a few sentences in and I was already in stitches!  I kept reading snippets out to my mum, who cracked up with me – she'll probably be borrowing this one from me when I'm done, something I shall fully recommend.  Y'know.  After rereading it a couple of times...  But the brilliant thing about Finding Audrey is that it's not just hilarious; it's so real too, so sad and poignant and deep.
Audrey was such an amazing character – she was so strong, even though she thought she was weak.  She was dealing with this awful, all-consuming illness and yet she still kept her wit and sense of humour.  She made me laugh, even when my heart ached for her.  I also totally related to her – I've not got any mental health issues, but I've been stuck at home, I've felt friendless, I've felt bad because I thought I was making my family miserable.  Audrey – I just totally got her and I absolutely loved her. 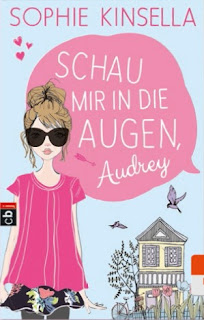 And Linus was the sweetest and the funniest.  That scene in Starbucks... God, I died laughing!   "Could I be like your shadow?"  OMG, hilarious!  But I loved how understanding and sweet he was!
I have a pretty bizarre and bonkers family who often make me laugh.  But even we aren't as brilliantly hilariously hectic as Audrey's family.  I mean, they were just... brilliant.  The Mum was addicted to the Daily Mail and always on the oldest son about his computer addiction.  The Dad was powerless against the Mum's Daily Mail-inspired schemes and routine changes.  The oldest son, Frank, was always on his computer – snarky, moody and occasionally crude (and always funny).  He actually reminds me of one of my younger brothers – annoying at times and hilarious at the other times, but always there if you need him.  And the littlest of the family, Felix, was adorable!  Seriously though, this is a family I'd love to know!
The writing was brilliant – it felt totally authentic as a teenager's voice and described the troubles of living with depression perfectly.  It was also, of course, totally hilarious a lot of the time – I adore the Turner family – they're so mad and brilliant!  And I totally loved the film transcripts – how we saw what Audrey saw through these scripts.  It was brilliant and so original!
The plot was awesome – sweet and touching and funny and, at the end, a little worrying.  I was hooked as I watched Audrey's struggles, hooked as I saw her fall in love with Linus "Orange Slice".  The love story was just too adorable, by the way, as was the natural way the family evolved.  I just loved all of it! 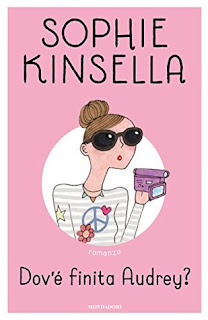 I found Kinsella's balance between hilarity (via the brilliance of Audrey's family) and severity (because of Audrey's illness and struggle to cope, because of the bullying and depression – both serious problems amongst teens today) absolutely perfect and spot on.  Sophie never made light of what Audrey was going through, never, not once.  She handled everything – Audrey's 'episodes' and doctor appointments and difficulties – with care, so much care, that it was impossible not to empathise totally with Audrey, not to totally understand how utterly serious her condition was.  And yet there were also the most hilarious moments in the book too, bits that had me crying with laughter followed by bits about bullying and depression that were so serious I felt like crying for a whole other reason.  I just think so many teenagers will empathise with what Audrey was going through, and will appreciate the brilliant moments of comic relief.  Kinsella proves once and for all that you can tackle an issue as serious as mental health amongst teenagers with the care and respect it deserves, but without making the book as serious and grim as so many other books of a similar genre.  Because yes, this is a serious book about a serious topic, but it's also a funny book about a funny family.  It's a blend that could have gone wrong under any other author's care, but a blend that feels so right and perfect when put together by Sophie Kinsella.
I don't have mental health issues.  But I was teased when I was younger.  And I have a condition that people often don't understand.  I know what it's like to be judged because people can't see what's wrong; I know what it's like to be told to just get over it.  I think everyone will be able to empathise and relate with Audrey.  I mean, who hasn't been picked on?  Who doesn't know someone with mental health issues – or have them themselves?  This is a serious book dealing with real issues that still lets you have fun.  And I love that.
Oh, jeez, I've just talked your ear off about this!  Sorry.  I just can't get over the perfection of this blend and over the awesomeness that is Finding Audrey.  I adore Sophie Kinsella – she's amazing! – and her first YA book just further cements how awesome she is in my mind.  I can't wait for her next YA book!

Read this book if you liked:
Shopaholic Series by Sophie Kinsella
One by Sarah Crossan
Because You'll Never Meet Me by Leah Thomas


** Quotes used are from a proof copy and may have been changed in the finished book
Posted by TheBookAddictedGirl at 00:30