The Vampire Hunters by Pete Johnson 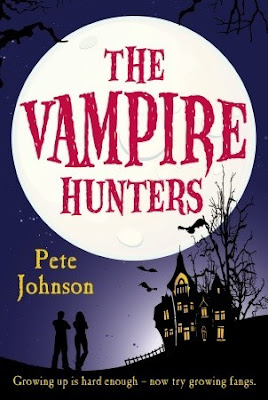 “On my thirteenth birthday, my life changed for ever.  That’s when I learned the shocking truth: I’m a half-vampire.”
Think that sounds cool?  Think again!  My secret blog is the only thing that’s kept me from going completely crazy.
To complicate things even more, there have been some vicious attacks in the woods.  Tallulah (definitely not my girlfriend) thinks a super-vampire is behind them – and she’s desperate to prove it, with a mysterious chain that’s supposed to glow red-hot when a vampire is close by.
I have a horrible feeling that the chain’s going to turn red-hot any day now…

Review
On his thirteenth birthday, Marcus' parents dropped the ultimate bombshell: he's a half-vampire.
Sounds cool, right?  Well, not so much once you've been almost killed by a full vampire - and garlic pizza - and suffered insane blood cravings.
Yeah, crazy, huh?  Marcus' blog is the only thing keeping him sane.
To make it all worse, there's been a string of vampire attacks in the woods and Marcus' definitely-not-girlfriend-friend Tallulah is sure some kind of uber vamp is behind them.  Which makes sense, seeing normal vampires think human blood is disgusting (foul tasting, not like animal blood, which they adore).
So therefore Marcus and Tallulah set off with a vampire-sensing chain that's meant to get red-hot when a vamp's near.
But are they prepared for what would happen should it go red-hot...?
I loved The Vampire Blog to pieces!  It was funny, addictive, scary - everything you'd want!  The main character is relatable, the story so fun and addictive.  Reluctant readers and vamp lovers alike will just gobble it up!  I read it in one sitting, laughing and grinning and just loving every second.  Marcus completely won me over in the first book and now I love him even more!  I love this whole world even more!  I love this series and am devastated that the next book will be the last - but I can't wait to read it anyway!
I loved all the characters in this book!  They're all quirky, original, varying.  And I love then all!  Marcus just kills me: he's so quirky and witty and mad and funny - just an insane, ridiculously loveable character.  And, man, he really does have a snarky comeback for everything!  Tallulah was really loveable too, 'cause she was so brilliantly arrogant and sure of herself, so eccentric and insane.  Sure, she was kinda grumpy, but that made her interactions with Marcus even funnier!  Gracie was a great addition to the plot.  She was sweet and funny and brave and stubborn.  I loved how she was a normal teen girl in a totally unnormal situation.  Yes, Pete has a way of writing characters that jump off the page, but obviously Marcus and Gracie stole the show for me!  They were closely followed by whom we shall call The Villain, who was creepy, genius and lure sneaky evil!  I also loved Marcus' very weird parents!  They're so brilliantly odd!
The writing was brilliant, but what really struck me was the humour - its effortless and witty and addictive and hilarious.  I love it!  Written in blog form, the short entries were infuriatingly addictive - and the perfect length for reluctant readers, with lots of places to stop (though why you'd want to, I know not) should you wish to.  And the plot was equally addictive, funny and spooky and full of action.  I loved that even with all the supernatural drama and blood craving, there's also normal teen drama.  Anyway, there's loads of suspense and the lead to the revelation (even though I kinda knew what it was) was addictive and exciting - MG readers will love it!
Again, gotta say, I love the vamp mythology in this series!  Getting to see how girls transition went was brilliant.  I loved his Johnson took traditional mythology and made it quirky and new.  And, again, I must liken the half-vamp transition to an exaggerated transition of becoming a teenager.  Love it!  It really shows how tricky adolescence can be.  And how having fangs is even harder!
And I love the way Pete Johnson tackles difficult issues.  They're really subtle and tie into the story so well - they're there and you can clearly see them, but they're not in your face or preachy like so many other books.  Remember kids, don't go off meeting people you've only emailed the once!  It could be deadly!
Again, I have to say that if you're looking for a terrifying read, this probably isn't for you.  After all, it's aimed at nine year olds.  But if you're looking for a quick, fun, funny, bonkers, spooky read this is perfect!  It's hilarious, amazingly written with an utterly addictive plot and a snarky, loveable lead character.  In case you hadn't gathered, I love this book!
With a reluctant, hilarious half-vampire lead and a super vamp villain at large, The Vampire Hunters was even better than the first book!  I sped through it, giggling and guessing, loving every second.  This is quickly becoming one of my favourite pre-teen books, and I just know all kids will love this book just as much as I did!  This is a great book and a great series and I cannot wait to read the next book!

Read this book if you liked:
The Vampire Blog Series by Pete Johnson
The Saga of Darren Shan by Darren Shan
Skulduggery Pleasant by Derek Landy


Happy Reading
Megan
* This book was received from RandomHouse in exchange for an honest review
Posted by TheBookAddictedGirl at 07:28

Vampires is not at all like in the movies or books. Sure, I understand. You are young you have the whole world open to you. You can be anything that you choose if you apply yourself and try hard to work toward that goal. But being a Vampire is not what it seems like. It’s a life full of good, and amazing things. We are as human as you are.. It’s not what you are that counts, But how you choose to be. Do you want a life full of interesting things? Do you want to have power and influence over others? To be charming and desirable? To have wealth, health, and longevity? contact the Vampires Lord on his Email: richvampirekindom@gmail.com