The Set-Up by Sophie McKenzie 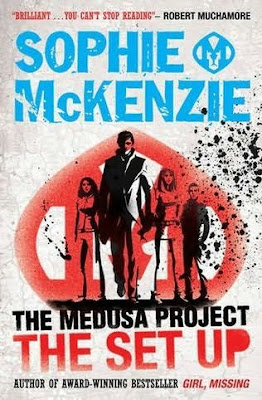 Series: Medusa Project, Book One
Publisher: Simon & Schuster
Format: Paperback (Waterstones Exclusive Edition)
Published: 2nd May 2009
Number of Pages: 320
Book: Bought
Genre: Science-Fiction, Realistic-Fiction, Thriller-Suspense, Action-Adventure, Mystery, YA, YA-Children Crossover
Recommended Age: 11+
Contains: Mild Violence, Swearing
No Alcohol, Drug References
Author's Blog: Sophie McKenzie
Fourteen years ago, scientist William Fox implanted four babies with the Medusa gene – a gene for psychic abilities.  But Fox died and the babies were hidden away for years.
Now they’re teenagers – and unaware that their psychic powers are about to kick in.
Cocky, charismatic Nico thinks his emerging telekinetic abilities will bring him money, power and the girl of his dreams.  He’s about to find out how wrong he is… 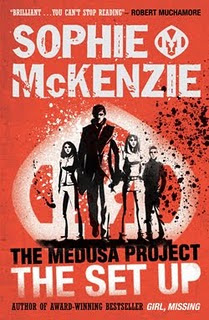 Review:
Over a decade ago, four babies were implanted with a gene known as the Medusa gene.  Its purpose?  To bring out psychic abilities.  But the scientist behind the experiment, William Fox, died, and the identity of the babies became unknown.  Now, all four are teenagers, with no clue of the powers that are inside them.
Nico Rafael’s power is telekinesis, and he’s certain that it will bring him everything he ever wanted – including the girl he’s loved for years.  But Nico is about to find out that sometimes, everything is not as it seems.  And that not everyone can be trusted…
This one had been sitting on my shelf for ages, just waiting to be read.  I can’t believe I left it for so long!  Just like all her other books, it was awesome!  Fast paced, strong characters, believable relationships, wonderful writing.  Plus: superpowers!  Call me juvenile, but who doesn’t want superpowers?!  The Set Up was a fun, funny, super-power-packed book, which left me addicted and itching for Book Two.  Another winner from Sophie McKenzie!  Loved it!
Nico was great: fun, snarky and very resourceful.  I just loved his sense of humour.  Although, I just can’t believe some of the things he used his power for!  He really loved Ketty – not having her as a friend devastated him.  Plus, everything he did, he did for Ketty: totally sweet.  On the other hand, he was kinda stupid and reckless sometimes: an act-before-I-think sort of character.  I loved him!
Ketty (short for Keturah, eek!) Wilshire was sweet, Nico’s best friend.  She was addicted to running, and wasn’t that interested in girly, material things.  She was… practical.  Even though at one point I felt like yelling at her, overall I really liked her.
Ed O’Brien was the new kid at school.  He was super smart, really nice, and kind of geeky.  Also… sort of a goody-two-shoes – a bit of a snitch.  But, as the book went on, he got more confident and sarcastic: I like him better snarky!
Dylan Fox was an odd character.  She seemed distant and almost… smug? to begin with.  She was also rather arrogant.  But she was good at jumping into action, with the: perfect drawl.  She was aggressive, but so vulnerable, damaged, broken.  And: wonderfully sarcastic.  All the way through, I wondered what she was hiding…  I started off unsure of her, but by the end I got her.  She had more backbone that anyone gave her credit for – than I gave her credit for.  I loved Dylan – she was the character I actually wrote the most notes on.
And there were two characters I swung between trusting, and being completely suspicious of.  I just could not make up my mind on whether or not they were good.  And I actually completely misjudged one of them!  Don’t you love people you can’t guess about?
Some twists… ok, I guessed (I’m a top-notch guesser).  But others… completely threw me.  And don’t you love surprises?  Guessable plots can be majorly boring, and therefore twisty books are lovely!
The best bit about this book was, by far, the action and super powers.  Or more specifically, the parts where there was action AND superpowers.  And how the abilities came about was also super cool (pun intended).  And the different powers were just awesome.  Mind reading, future seeing… it was all so, so brilliant!  I want a superpower, please!
The Set-Up was a quick, fun read, with great characters and action.  Sophie rocks!  And Nico’s the best!  I can’t wait to see where all the characters go, where the plot goes…
Star Rating:
4 Out of 5

Read this book if you liked:
Blood Ties and Girl, Missing by Sophie McKenzie
Hero.Com by Andy Briggs
Time Riders by Alex Scarrow
Challenges It's Taking Part In:
Happy Reading

I LOVED this book! The next one is great too! I didn't really like any of the main characters though! Fantastic review.