House of Secrets by Chris Columbus and Ned Vizzini 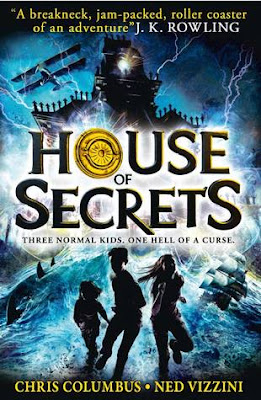 From the Back of My Proof Copy:
Set to be the biggest debut launch of 2013
A secret history
A mysterious legacy
Dark magic of untold power
And three kids who will risk everything to bring their family back together…

Synopsis From Goodreads:
When Brendan, Cordelia and Nell move to Kristoff House they have no idea that they are about to unleash the dark magic locked within.
Now the Walker kids must battle against deadly pirates, bloodthirsty warriors and a bone-crunching giant. If they fail they will never see their parents again and a crazed witch will take over the world.
No pressure then...
House of Secrets is the first book in a major new series.
It's going to be epic.

Review
‘Suddenly a face appeared.  Inches from Brendan's own, hissing, its voice like a swarm of wasps leaving hell.
"You don't belong here..."’
The Walkers kids used to have everything.  A normal life, full of books for Cordelia, games for Brendan and pony dreams for Eleanor.
That was before The Incident.
The Incident that made them leave their home and find a new place to live.
The Incident that led them to Kristoff House.
The kids know instantly something is up with the house.  First, there's a shadowy figure watching them, then darting away.  All they can find is a stone statue.  A statue that disappears, leaving a bald woman in its place, telling Bren to leave – now.  And then there's the price – the house is beautiful, old, full of antiques.  And yet it's cheaper than a flat.
So what's going on?
Well, the children soon find out, as they are thrown into the middle of a tangle of dark secrets – and darker magic.
Trapped in a whole other world...
Without their parents...
And completely, utterly alone... 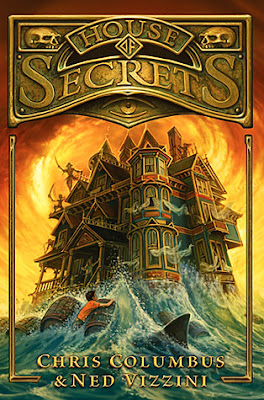 When I saw House of Secrets was written by Chris Columbus, I knew I had to read it.  I mean, he's a movie legend.  And Ned Zizzini?  He's the writer of Teen Wolf – a show I absolutely adore.  So it's safe to say that I had ridiculously high expectations of House of Secrets.  And I must say, it lived up to them.  It had all the action, adventure, suspense, fantasy, humour and family feel that I'd expect from these two authors.  But by far the best quality was the fantastical world – oh, and the wonderfully odd sense of humour too.  And my God, kids will love this!  I just know they will.  It's so exciting and accessible and enjoyable and is just a really fun, pretty easy read.
The siblings were all so brilliant.  They kinda reminded me of the Baudelaire siblings from the Series of Unfortunate Events – in a good way.  They were all so wonderfully unique and smart.  And I love the relationship the three of them had – it was so real and funny.  Their bickering was just hilarious – this one scene in particular just had me totally cracking up!  Out of the three, I think Cordelia was my favourite – she was the one I connected with instantly, what with her being intelligent, amazingly logical and a total book-lover-slash-geek.  So, obviously, I could relate to her the most.  And even though she was level headed, mature and calm, she was, hehe, named after Cordy from Buffy the Vampire Slayer!
I liked Brendan too – he was a total gaming addict (I’ve been there, guys: my brothers are addicted to that kinda thing too), but he was brave too.  He was constantly trying to prove himself, and some of his ideas were brilliant.  Others?  Yeah, not so much.  For example: his shouting match with the pirates...  Though that was hilarious!
Eleanor reminded me of myself aged eight – horse obsessed!  She was sweet and enthusiastic and funny, as well as being tough and brave and proving an eight-year-old could totally hold her own!  I loved her!
The other characters were amazing – they all had real personalities, all these quirks that made them, them.  Other than the siblings, some of my favourite characters were the pirates.  I mean, sure, they weren't exactly good or whatever, but man were they funny!  I also had a bit of a soft spot for Will, who was a bit sexist (he was a WWI pilot, though…) but was brave and loyal and when all’s said and done, isn’t that all that matters? Plus the villain...(ess?) was awesome – so scary and such a brilliant, strong baddie: you could really hate her but could also understand her too, if that makes sense. 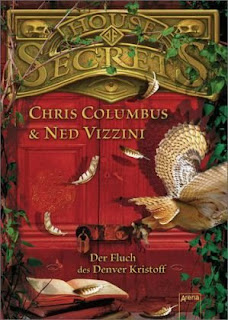 The writing was good – quite basic, but that's expected from a MG book.  Nonetheless, everything was wonderfully described and I loved the wit and humour in the dialogue.  Though sometimes it felt a little... I dunno, stiff, maybe.  But if I'm entirely honest, I think I only think that because I'm fussy.  Either way, it didn't really detract from what I really loved about the book – i.e., the plot, the kids and, even though I also hate her, the villainess.  And the plot, as expected from Columbus and Vizzini, was fast paced and action packed.  I loved that about it – how it was never dull.  It was the kinda plot you could just see inside your head, playing out like a movie.  It was really rather addictive.  It was just so suspenseful and full of action.  Plus, I never knew what was going to happen next.  I didn't even know who was going to die – I was shocked many times!
As I mentioned before, the best part of this book for me was the world.  It was so amazing – so inventive and 3D.   It was so awesome and cool and new.  But I was a little shaky about the whole magic thing – like, how much magic is there in the real world – is there magic or is it just ‘The Book’?  But again: me being picky.  I only started caring once I'd finished the book and knew how it all ended.  It's really just afterthought pickiness.
House of Secrets was an action packed book full of action, suspense, dark magic, witty siblings and, you guessed it, a house full of secrets.  I was pulled right into the story and literally raced through, totally hooked and desperate to know what would happen next, how the plot would end (well but with a nice twisty cliff-hanger that's left me desperate for more).  I really enjoyed it and I've been left desperate for it to be made into a movie – directed by Columbus, of course.  It would just kick butt.  But really, what else do you expect from Chris Columbus and Ned Vizzini?
House of Secrets didn't exactly blow me away in the way I thought it would, but it did blow me away in ways I wasn't expecting.  I really did enjoy the story and definitely recommend it – especially to younger readers and us older ones who just want a good old fashioned fantasy adventure romp!


* This book was received from HarperCollins in exchange for an honest review
** Quotes used are from a proof copy and may have been changed in the finished book
Posted by TheBookAddictedGirl at 06:07

I'm glad the author does a great job for the world-building! I LOVE well thought out and developed worlds! I REALLY want to read this - especially since it's recommend for fans of HP! It's so cool how J.K. Rowling has read the book and has her statement on the front cover! ^.^

Great review! I may buy this book for a rainy day when I want to escape into a fantastical world! :D

Ooh, glad you enjoyed this! It looks interesting. As Rachel said, so glad that the author developed the setting well. I can't cope with and undeveloped world, it's I annoying. Great review! :)

The book cover doesn't really interest me but I love the sound of this book; it's something I'll definitely have to look out for. Nice blog and a great review! :)

I'm new to all this blogging so would really appreciate if you could take a look at my blog: storytellershannon.blogspot.com