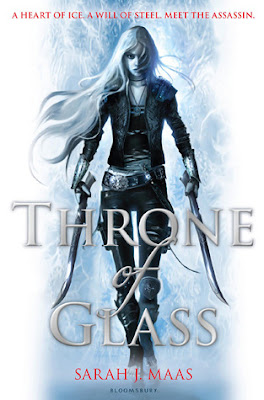 Meet Celaena Sardothien.  Beautiful.  Deadly.  Destined for greatness.
In the dark, filthy salt mines of Endovier, a seventeen-year-old girl is serving a life sentence.  She is a trained assassin, the best of her kind, but she made a fatal mistake.  She got caught.
Young Captain Westfall offers her a deal: her freedom in return for one huge sacrifice.  Celaena must represent the Prince in a to-the-death tournament – fighting the most gifted thieves and assassins in the land.  Live or die, Celaena will be free.  Win or lose, she’s about to discover her true destiny.
But will her assassin’s heart be melted. Review:
‘[Prince] Dorian steepled his fingers.  "I have a proposition for you."
"I'm listening," was all she said.'
Celaena Sardothien is known as Adarlan's Assassin.  She is the most skilled, deadly and infamous assassin in all of Erilea and in all her time she made but one mistake.  She got caught.
Celaena may only be eighteen, but she was charged with a life sentence at the saltmines of Endovier.  She was only expected to last a month, to be broken by the dreadful work and abuse and die a dreadful death.  But one year into her sentence, she is still alive and strong as ever, even though she has been scarred by her dreadful work.
And then she is offered a deal.
Her freedom will be returned to her - if she agrees to be the Prince's champion in a fight to be the official assassin of the King.
Celaena must fight thieves, murders and assassins in a battle to the death - literally, it appears, when dead bodies start popping up left right and centre.
As she desperately tries to catch the killer and win the competition, she slowly realises that her freedom might not be her only motivation any more...  That her cold, assassin's heart may just be melting...
I can't even describe to you how excited I was to read Throne of Glass.  There's been so much hype and excitement and I've seen so many amazing reviews of it.  Ergo, my expectations were super high going into this book.  And y'know what?  Throne of Glass lived up to every single one!  It was one of those rare books that outshone all the hype.  It was the most amazing debut and one of the most addictive books ever.  It's got to be one of favourites of the year and I'm now desperate for another book in the series!  I seriously can't wait for more, ‘cause everything just blew my socks off!
I loved all the characters, 'cause they were all so 3D and there were just so many to love!  Celaena was totally badass: ruthless, clever, snarky, hilarious and always planning her next move.  I loved that she wasn’t perfect and that she was this little teenaged girl who could kick everyone’s butt and leave them all dead, should she so desire.  It was awesome.  What I loved most was that she was so human too, so loving and kind.  Prince Dorian was just too cute – I loved his mischievous side: it was irresistible and so, so funny!  He was the cutest, sweetest thing – I could just take him home!  And Chaol was totally hot too: he was kinda serious-soldier and I loved how Celaena constantly exasperated him!  He was strong, silent, honourable and yummy.  But the supporting characters were just as brilliant.  Take the Princess Nehemia Ytger of Eyllwe, for example.  She was brilliant and just as strong willed and feisty as Celaena!  And the bad guys - so well done!  They were oh-so easy to hate!
Now, thanks to the two totally yummy guys in this book, there kinda was a love triangle.  Why the 'kinda' you might ask.  Well.  Besides being both utterly yummy, the boys are also best friends and obviously respect each other a lot.  Ergo, no fighting over the girl, nada unhonourable.  Somehow, Maas wrote a love triangle manages to be a triangle without really being one.  Amazing!
The writing just really, completely let Celaena get into our hearts and us into hers.  I loved being in her mind - seeing her mental calculations, how she could take someone out by planning ahead.  And I really loved how we got to see the story from everyone's POVs - it rocked!  The blend of action and romance, humour and suspense was just perfection and I can honestly say I was cracking up many, many times throughout the book!  And I just adored this plot!  It found that perfect balance between world building and action - and I do so love my action!  The plot was brilliantly twisty and utterly unpredictable.  And, HALLELUJAH!  An ending that leaves me wanting more, with just the right number of unanswered questions without an evil cliff-hanger!  The world itself was so well built and rich, like I was there myself.  I loved the court life mingled with assassin action and really hope that there will be more of the magical side in the series!
I think Throne of Glass might just be one of the best debuts I've ever read.  It's definitely one of my favourites in 2012.  There is basically nothing bad I can say about it.  The only thing would be I want to know more about Celaena’s past – and that’s literally it!  And I seriously just can't even put into words how awesome this book is.  I could ramble on forever, but as that would probably bore you, I'll shut up now.
But seriously.  Read this!  It is epic - one of the best books of 2012 by far!  I am now preparing myself for a long wait 'til Book Two - and, of course, the withdrawal and insanity that will therefore follow.  Woe is me!

Oh, and side not: I also learned the plural of sarcophagus is sarcophagi.  So there ya go!  Informative too!

Read this book if you liked:
The Mortal Instruments by Cassandra Clare
The Gathering Dark by Leigh Bardugo
Au Revoir, Crazy European Chick by Joe Screiber


Happy Reading
Megan
* This book was received from Bloomsbury in exchange for an honest review
Posted by TheBookAddictedGirl at 00:30

sarcophogi...hmm, well, you learn something new every day ;)

I have this, but for some reason I'm a bit reluctant to read it...it looks so...heavy :L But now I'm a little more convinced...hopefully I'll enjoy it! I love it when a book lives up to all the hype!

These titles sound awesome! I really want to check out Throne of Glass. Thanks for the great reviews. As part of a digital publishing team I appreciate the hard work that goes into your blog outreach and I hope to connect with you soon regarding our up coming book launches and promotions.
Thank you

Cliona: Oh, you are going to LOVE it! It's so funny and the guys are too cute and the heroine is brilliantly kickbutt and awesome... I loved it if you haven't gathered!! ;)
Premier Digital Publishing: Thanks! I think you'll love Throne of Glass! :D