A Diary Entry by Margaret Adler: Dance of Shadows 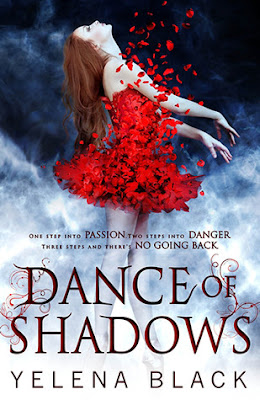 I don't know if you guys have heard of it, but next year Bloomsbury are publishing one of the most amazing and anticipated books ever.  The name of this book?  Dance of Shadows.  Don't believe the pure-awesomeness of this book?  Well, check out the Facebook page Dance of Shadows - and keep on checking it!  Loads of amazing things will be going up in the run up to publication in 2013.  Also check out Yelena Black's Twitter Account and the amazing Book Trailer of Dance of Shadows.   Now, to promote the book we have an amazing extra teaser for the book - an extract of Margaret Adler's diary.  Keep an eye out for clues, everyone, and always keep this one question in your mind:


Where Is Margaret Adler...?

Another first for me: I’ve at last ridden the subway without one of my parents there.

Maddy, it turns out, is a serious rare record junkie and likes to shop for vinyl. As in LP records. Like our parents used to play back before, when the world was new (How can someone who still sleeps with a teddy bear have such a seriously hipster hobby?) We don’t even have a turntable here, but that doesn’t matter to her: She wants “the 180-gram vinyl of the new Jack White” and there is nothing that will stop her from going to get it. And because I’m her roommate, and because I was looking for any excuse to go shopping, I tagged along with her to Academy Records, which it turns out is pretty near Barneys. Not that my roommate was interested in a cutting-edge clothing store.

Here’s the thing about living in New York: There are a lot of people here. And if you go anywhere, you are just surrounded by them, sitting on top of each other. I think that maybe having to be in such close contact with so many different kinds of people makes a person more tolerant.

And the subways are where you really get to meet people in all their grumpy glory. The trip downtown to the record store was no big deal, but on the way back, there was a homeless guy in our car. You’d think everyone else would shy away from him, but that’s the great thing about New York: You just accept that, whatever his problems, a homeless man has as much right to a subway seat as anyone else. And so everyone in the car was pretty chill.

And then he started talking. To me. “You’re a dancer,” he said. He was six feet away, but Maddy and I could both smell the alcohol on his breath.

But he wasn’t really listening. He waved his fingers toward my head and said, “You have an aura of . . .  darkness around you. Darkness!”

“You have an aura of crazy around you,” Maddy said. “Did I say aura? I meant odor.” Just then the doors opened at 50th Street, and she pulled me out of the train and steered me up to the street, saying, “Don’t let that bother you! I’ve ridden the train like, three dozen times, and that was the only time I’ve been accosted by some pervy weirdo. Anyway, we can walk from here.”

I acted like I didn’t care, but I did. All I could think about were those missing girls and the voices that I sometimes hear when I dance.

One thing was clear, though: I’m not going to ride the subway anymore.

I’ve been thinking. Sometimes friends come in the strangest packages. Maddy has turned out to be not a bad girl at all. In fact, she may be my best friend in this weird place. She’s not as competitive as Anna and Chloe; I think we’re a good team against those two haters. Life’s too short to spend cutting others down, you know? 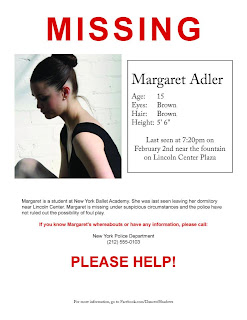 Whoa!  Guys, don't forget to check out Margaret's other diary entries - keep on looking for clues!  We need to know what happened to Margaret!  Keep an eye on the Facebook Page to keep up with it all and look at the other diary entries!
And watch this space - we'll be having more Dance of Shadows stuff on this blog leading up to the big release date.... :D
Posted by TheBookAddictedGirl at 00:30