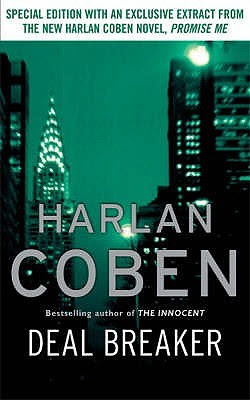 The novel that introduced Myron Bolitar – from the No.1 bestselling author
When a woman who everyone, including the police, believes is dead, makes a phone call to a young sportsman about to hit the big time, it seems that more than just his career is on the line.
Myron Bolitar investigates, and is plunged into a baffling mystery of sex and blackmail.  Trying to unravel the truth about a family’s tragedy, a woman’s secret and a man’s lies.  Myron soon realises that image and talent might make you rich, but the truth can get you killed…

Review:
'He leaned back and wondered how to handle his three big problems: Chaz Landreaux's sudden departure, Kathy Culver's possible re-emergence, and the Toronto Hilton's plumbing.  He decided to forgo the last.  Only so much one man can do.'
Myron Bolitar is a sport agent.  His clients are all pretty uneventful.

All except Christian Steele, an up-and-coming American football superstar quarterback.
So when Christian rings Myron in a panic, Myron rushes to his star's aid.
Turns out the athlete's missing-presumed-dead girlfriend could be very much alive.  After all, how does a dead girl make a phone call?
But as Myron begins to dig, he realises Christian's career might not be the only one on the line.  Can he unravel the web of secrets surrounding the missing girl - how, for instance, she ended up posing in a porn magazine - and discover the truth?
With other sports agents circling like sharks, it doesn't look promising.  Not even with the slightly unhinged Windsor Horne Lockwood III on his side - and watching his back...
Because let's face it.  With this case, Myron will need all the help he can get...
My aunt told me I had to read this series.  She adores Coben and said I would too.  Man, was she right!  I was hooked from the first page, cracking up at the wit and wry humour.  And, oh, it just got so much better from there.  Even though I seriously avoid any sport-related books like the plague, I found myself loving Deal Breaker to pieces.
The characters were all so brilliant.  Admittedly, some were kinda stereotypical or flattish or whatever, but all the main characters were so real and brilliant and most?  So funny!  Like Myron: he was so brilliant - witty, smart, brave.  He constantly had me cracking up!  His wisecracking was addictive - so witty and just hilarious.  As for Win, he was just classic!  Is it wrong that my favourite character is a slightly unhinged, maybe-a-little-psychopathic millionaire?  Maybe.  But I don't care!  Sure, he was totally crazy and a little scary, but he literally killed me - in a really, really good way!  Jessica was a good character too.  She was strong and smart and determined, but there we too many "beautiful" references - I was like, ok, I get it already!!  But my opinion based mostly on personally issues aside, Jessica was a strong woman - not an idiot airhead or anything, which was a good thing.

And I adored the relationship between Myron and Win.  I just loved the banter and quips and how Win always had Myron's back.  The two of them killed me!
I loved Coben's writing - it was so witty and gritty!  I loved how at times it was almost like Coben was making fun of himself.  He said things like: "Clever interrogation techniques.  Pay attention" and stuff, which obviously had me cracking up.  I'd die to possess the wit Coben so effortlessly writes. The plot was so, so awesome.  I wasn't really sure what to expect - I mean, how do you write a crime thriller when your main character is a sport agent?  But it really, really worked.  More than that - it blew my socks off!  I loved the fast pace, all the subplots and the secrets.  Yay!
Now, I must admit, I'm not a sport fan.  I barely know the rules of the games in my own country, let alone American football.  So I didn't get many of those references.  Luckily, though, after the first few chapters there were very few of them at all - it was all action.  So yay again.
Ok, so this book had its shortcomings – namely the frequent bad language and some minor character clichés – but overall it was such a fun read because of our two main characters, the humour, and the suspense.  It was just so freaking addictive and suspenseful and more than I'd suspected.  I'm wishing my aunt had made me pick it up sooner – ‘cause it was awesome.  And I loved that even though it was a crime book with action and violence and whatever it wasn't completely scarring or damaging.  Whoopee!
A book full of action, suspense and wisecracks, Deal Breaker had me hooked from start to finish.  It was twisty, and gripping and shocking.  I loved it to pieces!  Forget deal breaking - it was a complete deal maker in making me desperate to read the rest of the series!  I can't wait for more Myron and Win!

Challenges It's Taking Part In:
100 Books in a Year Reading Challenge 2012 (Hosted by Book Chick City)
Happy Reading
Megan
Posted by TheBookAddictedGirl at 04:34

This author's books keep getting recommended to me. I'm glad to hear you enjoyed it! I'll have to get hold this one day. :)

I am a huge fan of Harlan Coben. I prefer his standalone works, such as "Tell No One" and "Hold Tight," but Myron Bolitar isn't too bad. He's a bit odd, but that's the way some leading thriller agents are sometimes. I met Harlan Coben at an author event at the county library and he's very lively and funny.