After Eden by Katerine Pine 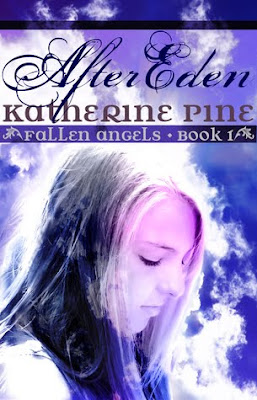 Series: Fallen Angels, Book One
Publisher: Self-Published
Format: eBook
Published: 17th April 2011
Number of Pages: -
Book: For Review From Author*
Genre: Dark Romance, Paranormal Romance, Fantasy, Paranormal, Urban Fantasy, YA
Recommended Age: 12+
Contains: Some Violence, Mild Law Breaking (Though That Was Actually Kinda Funny)
No Alcohol, Drug References
Author's Blog: Katherine Pine
Synopsis From Goodreads:
Devi knows she shouldn't trust the new employee at her favourite used bookstore. Sure, he's funny, smart and hands down the sexiest guy she's ever met, but something dark lurks behind his unassuming smile and sinful green eyes.
Still, a girl can't always afford to be picky. When an angel abducts your twin brother it should come as no surprise that the one person who can help you get him back is a demon--and only if you're willing to pay his price.
For the chance to get a free eBook copy of this book, go to the bottom of this review...
Review:
I was asked by the author, Katherine Pine, to review After Eden.  Well, with angels, dark romance, demons and the paranormal, this book sounded like my idea of heaven (no pun intended, there).  I had even been planning on buying it, before Katherine offered it to me.  And, after finishing, I can honestly tell you all that I loved this book!  Thank you Katherine, so, so much!
There was something very addictive about After Eden, right from the beginning.  The prologue was simply amazing, about how close Devi and her twin brother, Kai, were.  In it, the two are playing The Snow Queen, and she promises that she will always find him.  And then she wonders that if her name were Greta (the girl in The Snow Queen) she would be able to save her brother and find him, regardless.
“But I’d been named Devi, and so after he was stolen I couldn’t find him, no matter how hard I tried.”
Devi’s suffered lots of losses in her life: her brother’s abduction, her father’s suicide, part of her mother got lost along the way and part of herself disappeared when her brother did.  When she meets Oz, she knows he’s different, but then again, she’s used to different.  Because an angel took her brother...
There was something about Devi that drew me in.  She was almost socially awkward, and damaged after her brother’s disappearance.  Just... different.  More mature, but she was also able to laugh easier than most.  Smart, intuitive, emotional and brave, Devi was just easily likeable.  Then there were all the little mysteries about her: the sudden headaches she’d get for no obvious reason, the circumstances in which her brother disappeared...  She was an amazing protagonist, and so strong after all she’d been through.
Oz, our love interest, I loved.  He was funny, cute, with a punk-rocker-slash-artsy-type look.  I’m not a big fan of the love-at-first-sight, but I could get why Devi was so drawn to Oz.  He was mysterious, sweet and... well, perfect.  What I loved most was the fact that he wasn’t one of those overly-brooding male leads: he was witty, hilarious and his personality was really addictive.  Plus, he had a few tricks up his sleeve...
Devi’s best friend, Kim, was brilliant: and completely insane.  Oz’s friend Forneus was an odd character: one minute I hated him, the next I liked him, the next I hated him again.  But... he cared about Oz.  Even though he was mean.
Devi and Oz’s relationship was completely believable, even with the first-sight aspect.  The two of them just went together, perfectly.  And when they were together, more often than not I ended up laughing at one thing or another.
What I liked most about this book was the mythology: it was incredible, and obviously very well thought out.  The writing was brilliant, although there were a few minor grammatical mistakes.  The hints were dropped, the twists revealed slowly, teasingly, until I finally understood: by then, the book had finished, and I hadn’t put it down in hours.  And the characters were amazingly real, and I actually felt like I got to know them as I read.  I recommend this to all paranormal romance readers: it’s a new twist on the genre, in my opinion anyway.
After Eden was insanely hard to put down, and once I finished, I found myself thinking of the story and characters.  I was also left with a strong urge to go back into the world.  I can’t wait until the sequel comes out!  Because, right at the end, the ultimate piece of information was revealed...
Star Rating:
4½ Out of 5

To Get This Book For Free:
Go to Smashwords**
Type After Eden into the Search Box (or click: here)
Add the book to your Shopping Cart
There will be a Coupon Code box
Type this in:
FB92F
And Voila!
This code will work for a week, so go now!
(But you may need an account on Smashwords, I'm not sure...)
Read this book if you liked:
Twilight by Stephenie Meyer
Fallen by Lauren Kate
Hush, Hush by Becca Fitzpatrick
Suggested By The Author:
Personal Demons by Lisa DesRochers
Ethereal by Addison Moore
Challenges It's Taking Part In:
100 Books in a Year Reading Challenge 2011 (Hosted by Book Chick City)
2011 E-Book Challenge (Hosted by The Ladybug Reads)
Happy Reading
Megan
*This book was recieved from the author in exchange for an honest review
*Smashwords is a site where indie authors publish their books: it's a very cool and a brilliant place for self-published authors
Posted by TheBookAddictedGirl at 08:35

Great review! The characters all sound really easy to relate to, and it was probably so much fun to read about all of them. Wow, it seems that Devi has been through a lot, and I can't possibly imagine dealing with all of that. The mythology aspect of it sounds good as well. Can't wait to go pick this one up with the code! Thanks so much!

This sounds so good!

Tessa: They were fun, and the story was brilliant. You're welcome!
Cliona: It honestly is! I loved it.