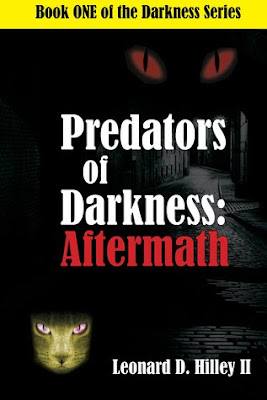 Series: The Darkness, Book One
Publisher: Outskirts Press
Format: eBook
Published: 11th April 2007
Number of Pages: 340
Book: For Review From Author*
Genre: Action, Adventure, Sci-Fi, Thriller, YA-Adult Crossover, YA
Recommended Age: 15+
Contains: A Lot of (Awesome!) Violence, Sexual Scenes, Swearing, Difficult And Too-Mature Subjects for Younger Readers: Touches On Rape, But No Graphic Scenes
No Alcohol, Drug References
Author's Blog: Deimosweb
Synopsis From Goodreads:
Fear What Lurks In The Shadows
The desolate streets of downtown Pittsburgh in 2073 are a reminder of the missile attack that forever changed the lives of the surviving scientists and students hidden in the fallout shelter of Helmsby’s Genetic Research Center. Believing themselves to be the only survivors, they station themselves inside the center until food supplies near depletion. Thinking the fallout has lessened, they emerge three years later to discover strange creatures patrolling the streets in search of human flesh and blood. The creatures possess the ability to shift their genomes and alter their appearances by realigning their genetic sequences. Daniel Hutchinson, their leader, teams with Lucas Ridale and together they set out to scavenge the area for food and supplies with the hope to find other survivors. But Daniel’s most recent journey uncovers mysteries more frightening than the shifters. He discovers the tip of Pittsburgh has been fenced off from the rest of the area. Low-flying helicopters observe the streets, making him ponder the question: Were the shifters released as simply part of a military experiment with humans being their prey?
Review:
I was lucky enough to get an email from the author asking if I would like to read this book, the other two in the series, and then if I’d like to interview him.  Of course, how could I say no?  The blurb drew me in, the premise was brilliant.  And, after finishing the book, I can honestly say that I loved it!  So thank you, Leonard D. Hilley II!
From the first sentence, I was hooked.  This was mainly because I wasn’t sure whether I should laugh or not.  The sentence was:
“Dropping a cat from the top ledge of a ten-story office building was not the best way to remain hidden, but it was necessary.”
It got better from there.  I was drawn into Pittsburgh, 2071, and a world after a missile attack that’s left only a few bands of survivors.  And, to make things worse, there are horrifying creatures, known as ‘shifters’.  The name comes from how they are able to change their form, “manipulate their own genomes” into any shape they want.  But the mutation has left them hungry for human flesh.  On top of that, they can heal themselves of just about anything, even grow back limbs.  Which makes them insanely hard to kill: not such a good thing for our male protagonist, Daniel.  But, the shifters are genetically impossible: how can anything evolve so much in three years?  They shouldn’t be here.  So how are they?  Who – or what – is behind them?
Leonard D. Hilley’s world was brilliantly thought out, and felt very real, almost like I was there – which is, can I just say, a terrifying feeling.  The way Hilley slowly reveals snippets of information was addictive, and I loved how there were so many mysteries, lies, secrets and twists, all of which left me reeling.
The characters were brilliant too: Daniel, the leader, who was brave and strong, but haunted by the past: lives he’s lost, his memories, nightmares.  He was easily likeable, and I admired him.  One of the characters that intrigued me the most was Dr. Helmsby: I couldn’t quite figure him out.  He was undeniably brilliant, driven, slightly obsessive and a charismatic genius, yet was at the same time slightly distant.  I just got a feeling, as I read about him... that he knew more than he was telling...  Lucas was insane, a risk-taker, and Daniel’s second-in-command: reckless and slightly unhinged – in my opinion, anyway.  Finally, Julia – who was in love with Daniel – was smart, brave and funny: very easy to like.
Something unique about this book is that it doesn’t skirt around subjects like death, violence and... um, sex-esque scenes.  I could tell it was written for mid teens – and may I just say, the writing was brilliant – and it definitely didn’t talk down to them, like some books do, which I think they’ll appreciate.  What with that, the non-stop action, suspense and violence, I know that adrenaline-junkie-fifteen-plus-teenagers will love Predators of Darkness: Aftermath, especially with the strong sci-fi undercurrents.  It’s also one of those books that just grabs you from the word go, pulls you in, and takes you on a break-neck-speed adventure that you just can’t leave until the book – or the series- is finished.
What I loved most was the message: humans should be careful when they mess with science.  If one person gets the information and wants to use it for the wrong reasons, then, bam!  We’re in a world like Predators of Darkness.  It honestly isn’t a stretch to imagine.  If you don’t fully understand what you’re doing, it can go bad, very bad.  The thought was there all through the book, and it terrified me.  It should terrify you too...
From the ending, I know there has to be more, that there’s worse to come.  And I can’t wait to re-enter the world, and find out where it goes next...
Star Rating:
4½ Out of 5

Read this book if you liked:
Adult:
Stephen King Books
Watchers or Mr Murder by Dean Koontz
YA:
The Dead by Charlie Higson
The Demonata or The Saga of Darren Shan by Darren Shan

*This book was recieved from the author in exchange for an honest review
Posted by TheBookAddictedGirl at 10:44

Wow!!!!! This sounds so good! I love the concept behind it, and it's interesting how maybe the shifters are part of a military experiment. This reminds me a lot of The Enemy by Charlie Higson and Gone by Michael Grant. Very well-done review Megan! And I can't wait to see your interview and the reviews of the next two books!

It was amazing! My next review is being published today. Thanks for the comment! (: