Beyond the Darkness by Leonard D. Hilley II 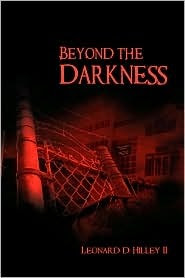 If you want to buy either Predators of Darkness: Aftermath or Beyond the Darkness go to: eBooks For Pleasure
Series: The Darkness, Book Two
Publisher: Outskirts Press
Format: eBook
Published: Paperback: 22nd July 2008
eBook:
Number of Pages: 280
Book: For Review From Author*
Genre: Sci-Fi, Thriller, Action, Adventure, YA, YA-Adult Crossover
Recommended Age: 12+
Contains: Lots of Violence, Mild Law Breaking, Swearing
No Alcohol, Drug References
PLEASE DON’T READ THIS IF YOU’RE PLANNING ON READING PREDATORS OF DARKNESS: AFTERMATH!
Synopsis From Goodreads:
“Leonard Hilley II's first novel, Predators of Darkness, shows us a nightmarish world of gruesome genetically-engineered monsters preying on humans, corporations more powerful - and more dangerous- than governments, and a web of lies and cover-ups that all sound remarkably like they could have been drawn from today's headlines. Fact or fiction? Read this gripping novel and find out."
- John Kachuba, Author of Ghosthunters: On the Trail of Mediums, Dowsers, Spirit Seekers and Other Investigators of America's Paranormal World
Three years after Daniel and the other survivors escaped the terrorizing, blood-thirsty shifters in Pittsburgh, his friends have moved forward with their lives, but Daniel cannot. He believes the conspiracies within TransGenCorp have not ended and more shifters exist.
Then Daniel receives a phone call from Lucas that bolsters his paranoia.
Lucas is being charged with murders he insists his clone committed.
Daniel soon discovers darker atrocities are emerging, which not only place his life in immense danger, but all his friends as well.

Review:
I knew there had to be more to come after Predators of Darkness: Aftermath, but I just wasn’t sure what.  After all, the Lucas-clone got away, and, well, it just couldn’t be over.  There was too much corruption, too many secrets, too many unanswered questions.  Plus, I had the sequel, given to me so generously by the author (thank you Leonard!).
Three years have passed since Predators of Darkness: Aftermath, and all the survivors are back in the real, outside world.  The evil mastermind behind the shifter experiment is dead, and therefore the nightmare is over.  But Daniel’s isn’t.  He can’t accept that it’s all over, that they’re all safe.  He just can’t shake the paranoia he acquired during his time in Pittsburgh.
Turns out, he was right.  Lucas’ clone kills four senators and the real-Lucas is arrested for the murder.  To prove his friend’s innocence, Daniel will have to renter a world he never wished to see again.  And this time, they’re all in danger: Daniel, Julia, their daughter Felicia, Nancy, Lucas, Lydia, Dr Helmsby and Johanna...
I admit, I wasn’t entirely sure where the plot would go, but I found myself being pulled in straight away and just as addicted.  I raced through it, hooked: it was amazing and the pace was perfect.  And it was the same adrenaline-filled roller-coaster as the previous book, the one I simply adore.
Daniel was very withdrawn at the start of the book, constantly in fear of the shifters, damaged by the nightmarish time three years ago.  He’s married to Julia now, who’s just as strong and brave as ever.  The two have a daughter, Felicia.  And a shifter-cat called Morton.  I loved Morton!  He’s a good shifter, created by Helmsby, who has the ability to tell right from wrong.  And a very good sense of humour.  He would do anything for his family, and his witty remarks kept even the darkest bits amusing.
I still love the very reckless, brave and caring Lucas.  A few characters I didn’t like in the first I grew to love: Johanna and Lydia to name a few.
Lucas’ clone had a name of his own in this book: Lucian.  You got to know him as a person, and I even felt sorry for him.  Idris treated him horribly, even using genetic blackmail on him.  Only a great author could make me feel for a guy who would’ve murdered everyone in the previous book.
I can’t wait to see where Game of Pawns takes this series, and I know that it will be just as fast paced and addictive as the rest of them.  I really recommend this, not just for teenagers or YA readers, but for adults as well.  It’s one of those that crosses between the two age groups so easily it appears to be effortless.  I love the twists, turns, the amazingly detailed characters and plots.  I can’t wait to get back into this world again!
P.S. And, can I just say, it was the coolest thing to have the FBI involved.  Supernatural-thriller meets police-drama.  Two genres I love.
Star Rating:
4½ Out of 5

*This book was recieved from the author in exchange for an honest review
Posted by TheBookAddictedGirl at 12:04

Email ThisBlogThis!Share to TwitterShare to FacebookShare to Pinterest
Labels: 4½ Stars, Action, Adventure, Beyond the Darkness, For Review, For Review From Author, Leonard D Hilley, Sci-Fi, The Darkness, Thriller, YA, YA-Adult Crossover

Awww shucks, I was just about to read your review of this one when I read your warning. Don't read this if your planning on reading Predators of Darkness: Aftermath! I guess I'll have to hold out on this one, but from your rating it sounds like you really liked it.