Harry Potter and the Deathly Hallows by J.K. Rowling 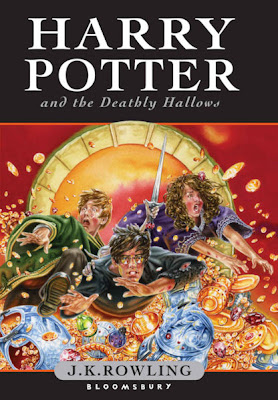 Series: Harry Potter, Book Seven
Publisher: Bloomsbury
Format: Hardback
Published: 21st July 2007
Number of Pages: 608
Book: Bought
Genre: Magic, Paranormal, Urban Fantasy, Quest, Action, Adventure, YA, YA-Adult Crossover, YA-Child Crossover
Recommended Age: 12+
Contains: Lots of Violence, Mild Swearing, Death
No Alcohol, Drug References
Author's Blog: J.K. Rowling
Synopsis From Goodreads:
Harry has been burdened with a dark, dangerous and seemingly impossible task: that of locating and destroying Voldemort's remaining Horcruxes.  Never has Harry felt so alone, or faced a future so full of shadows.  But Harry must somehow find within himself the strength to complete the task he has been given.  He must leave the warmth, safety and companionship of The Burrow and follow without fear or hesitation the inexorable path laid out for him...
Review:
“I’m going to keep going until I succeed — or die. Don’t think I don’t know how this might end. I’ve known it for years.”
I’ve read this book three or four times, and still that quote jumps out at me.  It’s not something you expect from a seventeen-year-old boy, even if he is a wizard.  But Harry has faced death over and over, and he’s willing to do anything to defeat Voldemort, and to make the world better for the ones he loves.  Hard-core Potter fans may remember the prophecy from Harry Potter and the Order of the Phoenix; “neither shall live with the other survives”.  This fight for survival goes hand-in-hand with the quest to destroy the Horcruxes that are Voldemort’s back-up and his means for immortality.
Voldemort is back, and his Death Eaters are everywhere.  Harry, Ron and Hermione have left Hogwarts to search for Voldemort’s Horcruxes: dark magical objects, created by ripping your soul apart (by murdering someone) and placing part of it in an object of your choice.  The only way to kill You-Know-Who – permanently – is to destroy all his Horcruxes, and to then kill him.  But, as if finding the things isn’t hard enough, there’s then the minor problem of actually destroying them.  And then of killing Voldemort...
Let’s face it: everyone knows of Harry Potter, whether it’s from the books, the films or the general hype surrounding the boy.  These books got me into magic and the paranormal, and I was a fan long before the films.  It’s managed to get children and adults alike read, and I’ve now raced to get to the end both with my mother four years ago, and a nine year old last month.  It’s one of those books that just appeals to all age groups, and you have to admire both J.K. and her world for that.  Especially as if asked ‘What fictional world would you pick to live in?’ most book-bloggers instantly say: Harry Potter’s world.  If that isn’t a literary achievement, I don’t know what is.
Now, you can’t have an epic finale or quest without casualties.  I knew this before I read it the first time, but still I cried bucket-loads.  I still actually cried as I reread it for the umpteenth time.  It was almost like a bloodbath, and I couldn’t help thinking ‘Why, why, why?!”  My heart ached, because even though to achieve epicness (yes, I know that isn’t a word), someone really does have to die heroically, I just couldn’t see why so many had to.
Of course, there are breaks; humour, and these normally come in the shape of Fred and George, and the secret radio station called Potterwatch.  Lee Jordan, AKA River, makes a very amusing appearance, and as do the Weasley Twins.  I laughed out loud every time at Fred’s:
“For instance, this new idea that You-Know-Who can kill with a single glance from his eyes. That's a Basilisk, listeners. One simple test, check whether the thing that's glaring at you has got legs. If it has, it's safe to look into its eyes, although if it really is You-Know-Who, that's still likely to be the last thing you ever do.”
And some of the characters really come into their own: I loved Neville and Luna before, but after this book I loved them.  Plus, a few secrets are exposed, and we finally get to see where all stand...
Now, downsides: the ending left me unsatisfied.  It felt a little rushed, and I just wanted to know more.  If you ask me, my mum, and my aunt, J.K. could’ve written a whole other book about ‘After’.
Laugh, cry, smile, I do admit I do it all reading these books.  And if asked what my favourite series is, I say straight away Harry Potter.
Enough said.
Star Rating:
4½ Out of 5

Harry Potter is also my favourite series. Ever. And ever. And ever. They just give you this feeling that no other book can give me.Is that weird?

Yes, I still tear up when rereading the death scenes too. I also would've liked to know more about what happened to our favourite characters afterwards. I'm hoping Jo writes all about it in the Encyclopedia! Or even better, perhaps Book 8? :D