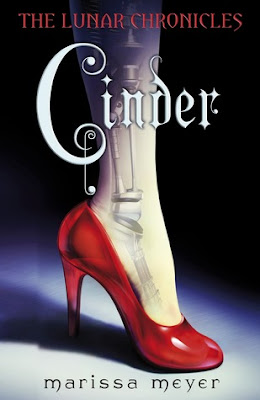 Series: The Lunar Chronicles, Book One
Publisher: Puffin
Format: ARC
Published: 5th January 2012
Number of Pages: 400
Book: For Review*
Genre: Dystopian, Science-Fiction, Action-Adventure, Romance, Fairy-Tale, Fantasy, Steampunk, YA, Pre-Teen
Recommended Age: 11+
Contains: Mild Violence, Death, Mild Swearing
No Alcohol, Drug References
Author's Site: Marissa Meyer
A forbidden romance.
A deadly plague.
Earth's fate hinges on one girl . . .
CINDER, a gifted mechanic in New Beijing, is also a cyborg. She's reviled by her stepmother and blamed for her stepsister's sudden illness. But when her life becomes entwined with the handsome Prince Kai's, she finds herself at the centre of a violent struggle between the desires of an evil queen - and a dangerous temptation.
Cinder is caught between duty and freedom, loyalty and betrayal. Now she must uncover secrets about her mysterious past in order to protect Earth's future.
This is not the fairytale you remember. But it's one you won't forget.
Review:
Cinder is the best mechanic in the kingdom.  She’s also a cyborg.  A plague is sweeping through the land of New Beijing.  A manipulative alien queen is trying to force young Prince Kai into a marriage alliance, threatening his kingdom with war.  Cinder is stuck in the middle of it all, trapped by loyalties and her growing feelings for Kai.  When the truth behind Cinder’s mysterious past is revealed, it changes everything.  Caught between love and hate, freedom and war, Cinder’s actions could change the future forever…
Cinder, Cinder, Cinder.  Where do I start?  How do I describe the pure awesomeness that makes up this book?  Imagine the Cinderella fairy tale.  Now imagine it in a futuristic world, where Cinderella is a cyborg in a kingdom on the brink of war with a non-human race with freaky powers.   There’s also an incurable plague sweeping through the land.  And throw in a gorgeous prince with an irresistible smile, just for luck...  Ah, Cinder…  loved it!
Cinder herself was someone I liked straight away.  She was funny and sarcastic, as well as being totally awesome, with some really cool cyborg powers!  Cinder was just a really sweet person, who didn’t deserve any of the bad things that happened to her.  She was also the perfect heroine: kickbutt, strong, witty, caring and not perfect.  She was real.  I loved her, and seeing her grow into herself.
And Prince Kai (our very own Prince Charming) was really sweet and kind and down to earth.  And drop-dead gorgeous, obviously.  I found him really funny and brilliantly sarcastic.  And you just know that he would do anything for his people from the moment you meet him.  I loved him: I mean, forget Prince Charming, I want me a Prince Kai!
Now, I just have to mention Iko, a little android with a unique personality.  She was so cute!  And funny.  She was like a totally juvenile (and freakin’ hilarious) teenage girl.  I never thought I could love a little robot as much as I loved Iko!
The Lunas, the ones New Beijing was almost at war with were terrifying!  They were more-than-human-humans, with freaky mind-controlling powers.  They were the perfect ‘bad-guys’, for lack of a better word: scary, imposing with an evil, manipulative queen…
Now, while I am aware this is a book, that the things in it are fantasy, the way the cyborgs were treated… it made my blood boil.  They were taken, against their will, and used as guinea pigs.  Treated like slaves, second class citizens.  It was a brilliantly crafted mirror of what has happened in the past in some cultures.
Before I say anything else, can I just say: I loved this world!  Cyborgs, androids, dashing princes, evil stepmothers.  It has seriously got to be the best Cinderella twist EVER!  And it was just insanely addictive, with a killer ending that has left me desperate for Book Two!
Although I managed to guess a few twists, I loved every turn Cinder took.  I loved the plot, I was never bored.  I was on the edge of my seat, unable to put it down.  I fell in love with all the characters – the amazingly strong Cinder, the adorable Iko, the sweet Peony, the gorgeous Kai.  I adored the relationships: the horrid one between Cinder and her stepmother, the amazingly slow and beautiful one between Kai and Cinder, the teacher-student bond between the brilliant Dr Erland and Cinder.  I just loved every moment of Cinder and I’ve been left desperate to know what happens next.  I need to get back into Cinder’s world!
The writing was amazing.  It was written so younger kids will love it, and instantly get stuck in, but so older readers can see some parallels between their world of the future and our past.  Discrimination, plague, wars, forced alliances.  Somehow Meyer managed to effortlessly weave the old with the new, the young and the old, the future and the past, science fiction and fantasy.  I was just sucked in, absorbed in the story.  Cinderella has been given a new lease of life in the brave Cinder, a kickbutt awesome heroine who most definitely trumps Disney’s princess.  And she felt real. Like I knew her, which is even more important for me.  Meyer nailed it!  In other, shorter words.
Star Rating:
4½ Out of 5

Read this book if you liked:
Vampire Academy by Richelle Mead
The Hunger Games by Suzanne Collins
The Iron Fey by Julie Kagawa
Challenges It's Taking Part In:
100 Books in a Year Reading Challenge 2011 (Hosted by Book Chick City)
Megan
* This book was received from Puffin in exchange for an honest review
Happy Reading
Posted by TheBookAddictedGirl at 13:01

I feel like EVERYONE has read this book, BEFORE it was even released. BUT I've not read a negative review yet, so perhaps I'll have to check it out!

Hey Lady!: I really reccomend it! It's an amazing book! :D