Before I hand over to Sue, I'd like to say how awesome Chocolate S.O.S was!  I really did laugh myself silly (see my review: here)!  Now, along with Sue's top Writing Funny tips, we also have the first chapter of Chocolate S.O.S, and a video interview Sue did a little while ago on Jess Jordan.  Also: a chance for three of you lucky readers to win a copy of Chocolate S.O.S (UK only)!  I hope you enjoy the guest post as much as I did, and check out the offical website: Jess Jordan! 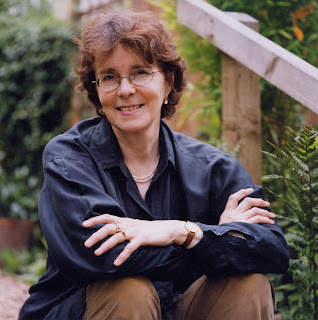 Create a character, give her or him a project, and then put obstacles in their way. That’s the source of almost all stories. Turning it into comedy just means approaching it differently.
There are loads of different sorts of comedy: situation and character comedy are the best because you can build whole books around them. For example, you might have two contrasting characters: a girl called Morgan who’s tremendously intelligent but very clumsy and forgetful, and her friend Holly who’s anxious and fussy and hates hurting things.
Give them a project: going camping for the weekend, for example. Just pitching the tent becomes a huge challenge as Holly obsesses about crushing insects while Morgan trips over the tent pegs and forgets where she’s put the kettle because she’s in a world of her own, dreaming about archaeology. 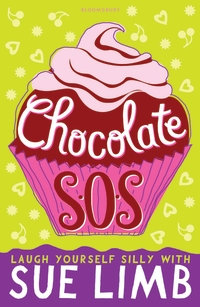 Character dominates and determines everything. The simplest everyday chore, such as washing the dishes, can become a completely different project in the hands of different characters: imagine how it could vary if the person was superstitious or paranoid or over-confident or slapdash or even totally inexperienced in the arcane mysteries of dishwashing (ie almost any young male whose Mum has sheltered him from such horrors).
Exaggeration has a comic effect, and we all use it in everyday life. In fact, I’ve just used it in the paragraph above – can you see where?
‘I’m shattered – I’ve just vacuumed the entire planet!’ we might groan after ten minutes’ hoovering. This kind of exaggeration for comic effect is called Hyperbole as the Greeks used it all the time – although I think Hyperbole also sound like a cleaner you put down the loo.
Irony is a comedy device used a lot, from Jane Austen to The Simpsons. Basically it involves saying the opposite of what’s normal. ‘Well that lesson about the coalfields of Pennsylvania was so thrilling I’m not sure I’ll be able to sleep tonight.’ Actually there’s a dash of Hyperbole here as well.
Hyperbole and Irony: great comedy tools, but also lovely names for a couple of small dogs, if you like that sort of thing.
Previous Stop on the Sue Limb Blog Tour: The Mile Long Bookshelf
Thanks Sue!  These tips are amazing and really funny too, and I know that they will help any budding writer who reads them!  Everyone: don't forget to check out Jess Jordan's site, and all of the previous stops on the tour!  And check out the  first chapter: it's amazing!!
a Rafflecopter giveaway

Thank you for a lovely giveaway! I find I tend to read too many sad/serious books. I think the Jasper Fforde novels are funny so I'll say those, for example Lost in a Good Book.
Lindsay

Sounds like a great read to liven up the day. :)

This looks really good.Remove my entries as I am in the US..sorry:)
I am a new follower..looks like you are almost at 500..yippie!

Hi! OMG I love your blog and brilliant Giveaway! I think some of my favourite funny books are The Cardturner by Louis Sachar and because I usually read adventure or romance, Iv been wanting to read Chocolate SOS for ages!

I love The Diamond Brothers by Anthony Horowitz. They're really funny!

I haven't read many funny books yet, I'm just getting into reading so am open to anything, having read the first chapter it looks great.

love your blog! Thanks for the fab guest post and great giveaway!

Thank you for the giveaway! Warning: May contain nuts by John O'Farrell is one of my fav funny books.