Every Other Day by Jennifer Lynn Barnes 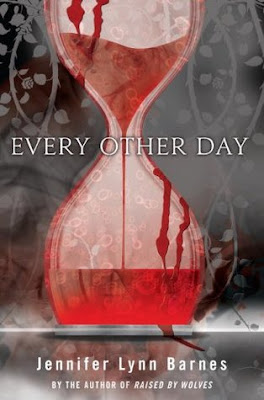 Publisher: Quercus
Format: ARC
Published: 2nd February 2012
Book: For Review*
Genre: Urban Fantasy, Paranormal, Dark Romance, Science-Fiction, Action-Adventure, YA
Recommended Age: 12+
Contains: Violence, Death, Mild Swearing
No Alcohol, Drug References
Author's Site: Jennifer Lynn Barnes
The THRILLING and SEDUCTIVE new novel from the author of the HUGELY POPULAR RAIED BY WOLVES SERIES
Every second day, Kali D’Angelo is a normal sixteen-year-old girl.  She goes to high school.  She argues with her father.
She’s human.
But every other day… she’s not.
Though she’s not quite sure what she is on those days, Kali knows what she does – she hunts, traps, and kills demons, hellhounds, and other supernatural creature that threaten her world.  On those days, she is practically indestructible.
But when Kali notices a mark on a popular girl at school, she knows instantly that the girl is marked for death by one of these unworldly beings.  And she knows she has only twenty-four hours to save her.
There’s only one problem – it’s the wrong twenty-four hours.
Review:
Every second day, Kali D’Angelo is perfectly human.  And every other day.  Well, she isn’t.  She’s other.
Kali has no idea what she is, if there are others like her.  But what she does know is what she can do.  She hunts down hellhounds, zombies and everything out there that goes bump in the night.  With her super-fast healing, lightning reflexes and affinity for weapons, she’s more-or-less indestructible.
But then she sees a mark on a girl’s back at school.  It’s a mark of death, and Kali only has 24 hours to save the girl, before the supernatural creature kills her.
The dilemma?  It’s the wrong 24 hours.  Kali is completely, utterly human.  That doesn’t mean she won’t do everything in her power to save the victim…
Those of you who have checked out my review list will probably be able to guess that I’m somewhat of a paranormal addict.  Therefore this one was right up my street!  With enough of that awesome wise-ass-ness – the likes of which Rose and Buffy have – and the awesome characters and world, I loved this one!  And seriously… need a sequel!
Kali D’Angelo, aged sixteen, was someone I liked from the word go.  She was so snarky and funny, with a really ironic, wry sense of humour.  Plus, some of her powers?  So cool, and unlike anything I’d read about before!  She had a total hero complex, was mildly bonkers and, well, freakin’ brilliant.  But beneath all the bravado and butt-kicking, she was really vulnerable, which made her feel more real to me.
Skylar Hayden, Kali’s new-found best friend, was perky, earnest, a fast talker and so hyper!  I fell in love with her madness: she was just so cute and funny!  Her enthusiasm and optimism were addictive, and I found myself grinning whenever she was in a scene.  She literally killed me, especially about how someone so sweet looking and cheerful can be such a brilliant evil mastermind!  She was my very favourite character, right from the beginning, and when I found out her secret I loved her even more.
Bethany Davis, one of those girls, or so Kali thought.  To begin with Bethany was a classic mean girl, but she was really smart, ‘occasionally’ nice and always funny with her mean-snarkiness.  I just loved how she described herself: “shallow, not a sociopath”.  Beneath the “bitch shield” she was really sweet and brave, fragile and I loved the glimpses we got to see of the hidden Beth.
Most of the other, minor characters were brilliantly done – Kali’s dead being one of them.  I liked how as the book went on, my opinion of him changed.  Meanwhile Elliot Hayden, Skylark’s brother and Bethany’s boyfriend, although cute and kind, wasn’t really as 3-D as the others.  As for the mysterious Zev: I was desperate to know his secret all the way through.  (I didn’t guess it at all!)
And I just loved the twists Barnes put on all the supernatural lore!  It was all so cool and new.  She put her own spin on zombies, hellhounds, chupacabras, everything!  And as for how Barnes rewrote history… pure genius.  I am officially crazy-in-love with this world!  And I mean when-the-heck-can-I-move love.  Also lovin’ the new species Barnes created!  Human one day, kick-ass demon hunter then next?  Beyond awesome and wonderfully padded out!
I adored the writing: it was snarky, witty and absolutely hilarious.  Plus, there were loads of paranormal things to fight and the heroine who was just kick butt awesome!  The writing felt totally teen and completely Kali.  I loved the pace and style, but even more addictive were the character relationships.  The ones between Skylark and her brothers were ever-amusing, with just the right balance of exasperation and love!  The one between Kali and her dad was intriguing: it was like they had their own language of evasion and white lies.  But my favourite duo by far was Skylark and Beth.  God, did those two kill me!  Their witty banter, Beth’s snarky comments and Skylark’s insistent perkiness made for some brilliantly hilarious scenes!
From the blurb, I thought the plot would be straight forward.  Y’know, see, kill, save.  How wrong I was!  There were more than enough turns to keep me completely absorbed in the story.  The pace was more or less non-stop: and you just gotta love supernatural fights!  Admittedly, I did guess some of the twists – they were rather obvious in my eyes.  Some I suspected – and hoped like crazy were not true.  Some completely threw me.  And overall?  Awesome plot!  And I liked that it was all about the girls, not a huge romantic thing – just the smallest bit of a highly unconventional romance…
A kick—butt hunter, a snarky cheerleader, a pixie-like optimist with a secret and a world full of demons and monsters, Every Other Day was an awesome paranormal book that had me laughing on the edge of my seat, and crying at one point.  Loved it!
Star Rating:
4½ Out of 5

Read this book if you liked:
Raised By Wolves by Jennifer Lynn Barnes
Vampire Academy by Richelle Mead
The Drake Chronicles by Alyxandra Harvey
The Mortal Instruments by Cassandra Clare
Challenges It's Taking Part In:
100 Books in a Year Reading Challenge 2012 (Hosted by Book Chick City)
Happy Reading
Megan
* This book was received from Quercus in exchange for an honest review
Number of Pages: 352
Posted by TheBookAddictedGirl at 11:10

Email ThisBlogThis!Share to TwitterShare to FacebookShare to Pinterest
Labels: 4½ Stars, Every Other Day, Jennifer Lynn Barnes

I loved this book as well! It was so cool and original. Great review!

Hi! I received this book to, and I can't wait to read it!! This is an AMAZING review! Bx

Michelle: Thanks! I love the twist on the hunter genre!
Beth: Hope you love it as much as I did! Thanks! :)

I enjoyed too, and loved where plot took us.
Thanks for review.
Brandi from Blkosiner’s Book Blog