In My Mailbox was created by Kristi at The Story Siren.  It's a perfect way to see who's reading and review what.  Awesome! 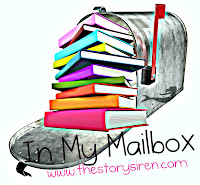 So, went to the library to pick up a book on body language (I'm just that weird) and ended up leaving with four more books.  Also went on a book website - just to browse.  I ended up ordering some.
But, on the bright side, all the books are good, and I got two new ones to review with a entirely different main girl: a mermaid!  Can you believe I've never read a mermaid book?
Anyways, this is what I got:
For Review:

Between the Land and the Sea (Marina's Tales, Book One) by Derrolyn Anderson (Goodreads | Amazon)
Something extraordinary is lurking in the deep ocean waters off the coast of Aptos, California. In just a few weeks after moving to the small beach town, sixteen year old Marina has nearly drowned twice, enchanted the hottest guy in high school, and discovered a supernatural creature. If she can only manage to survive her increasingly dangerous encounters with unpredictable mermaids, she might just be able to unlock the mystery of her past to learn how to appease the mysterious forces that seem to want something from her...and maybe even find true love along the way.
Between The Land And The Sea is the first book in the series "Marina's Tales". Her story continues on in book two, The Moon And The Tide.
The Moon and the Tide (Marina's Tales, Book Two) by Derrolyn Anderson (Goodreads | Amazon)
These two were sent to me by Derrolyn, and she described them as: "sweet romantic suspense with a touch of the supernatural".  What kind of paranormal addict would I be if I turned down such an awesome mermaid supernatural love story?
Bought:

Candor by Pam Bachorz (Goodreads | Amazon)
If You Stick Around, You'll Get The Message
Wow; this was an amazing book!  I sat down to read a little of it, then, suddenly I just couldn't put it down!  I still have my review to write, but I'll tell you now: this is a

book!
Dancing Jax by Robin Jarvis (Goodreads | Amazon)
This is described as a "brilliant supernatural thriller with a modern twist" and I've only read the first chapter, but it looks amazing.  Can't wait to see where the playing-card world goes!
Just In Case by Meg Rosof (Goodreads | Amazon)
No and Me by Delphine de Vigan (Goodreads | Amazon)
Two Girls, Three Friends.
One Family Falling Apart.
I've wanted to read this for ages, and so when I happened across it, how could I not take it home to read?  Just looks so good, and it was oringally in Francais.  Very cool.  (:
Well, that's me for this week.  Sorry this is so late, but my laptop's gone and died on me, and seeing as it's the bank holiday I can't get it fixed 'til tomorrow.  So, I'm sorry if my posts aren't as regular this week.
What did  you get in your mailbox?
Posted by TheBookAddictedGirl at 08:07

Email ThisBlogThis!Share to TwitterShare to FacebookShare to Pinterest
Labels: Extras, In My Mailbox, In My Mailbox #16, Meme, The Story Siren

Wow, those look like some good books! I hadn't heard of the Dark Touch trilogy before.

They look really good! Thanks! :)

Oh, I have Between The Land And The Sea and its sequel for review too! Trust me, you'll like them :) I'm almost done with the first one and it's pretty good! Oh, you got Candor!!!! Can't wait to hear what you think of it! Great mailbox!

Ooooh, great haul! I've heard the Dark Touch books are brilliant, and I SO want to read Dancing Jax! It sounds so exciting!

oooo great books, I hope you enjoy them! I have heard such great things about some of these!